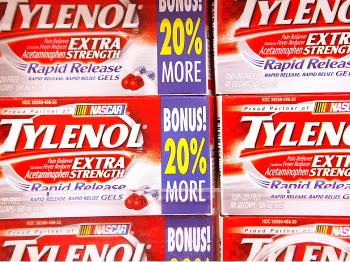 Johnson & Johnson is recalling all Tylenol arthritis medicine after capsule were found to be contaminated. (Scott Olson/Getty Images)
Business & Economy

Ian Ritz
View profile
Follow
biggersmaller
Print
NEW YORK—The makers of Tylenol are recalling all types of arthritis capsules—a step up from the initial recall of only one type of capsule. The nausea and diarrhea incurred by the faulty pills were “temporary and non-serious,” the Food and Drug Administration said in an official statement. The capsules also have an odor problem.

Industry professionals believe the culprit is a chemical found in the packaging that had come from the wood used in the pallets in the Tylenol warehouse.

Last month Johnson & Johnson announced an official recall on Tylenol Arthritis pills in bottles that had the EZ Open Caps.

The instructions for consumers with the pills are to stop taking them immediately and contact their doctor before contacting Tylenol for a refund or assistance with side effects. Consumers can reach Tylenol with questions or complaints at www.Tylenol.com or 1-888-222-6036.

Johnson & Johnson’s stock value has not been reduced due to the recall and there are no reports of serious illness. Tylenol’s new arthritis capsules are scheduled for release in January 2010, after a planned relocation of production and possible change in packaging.