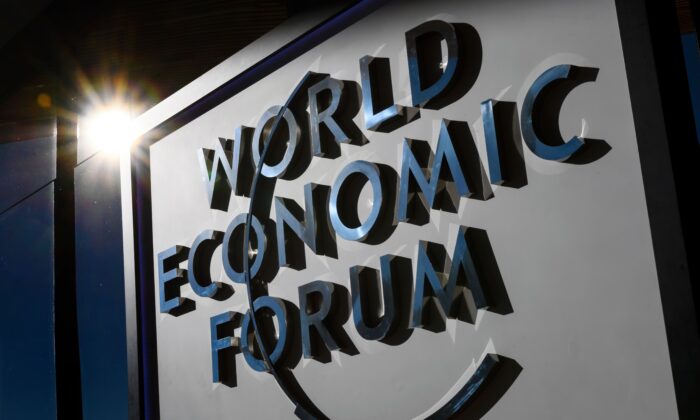 A sign of the World Economic Forum is seen in Davos, Switzerland, on Jan. 20, 2017. (Fabrice Coffrini/AFP via Getty Images)
US News

Just weeks before the first case of COVID-19 was confirmed, a group of elite government officials, business people, and scientists gathered in New York to plan various strategies for steering society through a deadly pandemic.

The scenario may sound like some sort of a conspiracy theory, but it happened two years ago.

When the initial diagnosis of COVID-19 was confirmed just weeks later, speculation abounded about the similarities—so many so that organizers issued a response.

While no hard evidence has been produced to substantiate the speculation, Event 201 did portend how many of the same global institutions would respond to some of the issues that arose from COVID-19 months later—including how they would push information censorship.

Event participants included then-Columbia University senior research scholar Avril Haines, who is now the U.S. Director of National Intelligence; Chris Elias, the president of the global development program at the Bill & Melinda Gates Foundation; George Gao, the director-general of the Chinese Center for Disease Control and Prevention; and Stephen Redd, then-deputy director for public health service and implementation science at the U.S. Centers for Disease Control and Prevention (CDC).

The participants were presented with a simulated outbreak of “novel zoonotic coronavirus” transmitted from bats to pigs to people, leading to a severe pandemic.

“It is first exported by air travel to Portugal, the United States, and China and then to many other countries. Although at first some countries are able to control it, it continues to spread and be reintroduced, and eventually no country can maintain control,” it stated.

On some issues, Event 201 was divergent from the real-life pandemic—perhaps most prominently with respect to travel and lockdowns, as Event 201 didn’t recommend lockdowns and was explicitly opposed to travel restrictions.

“Countries, international organizations, and global transportation companies should work together to maintain travel and trade during severe pandemics,” Event 201 said in its recommendations. “Travel and trade are essential to the global economy as well as to national and even local economies, and they should be maintained even in the face of a pandemic.”

But on communications, the recommendations from Event 201 are similar to those that followed COVID-19—as were the actual events.

During the simulation, for instance, Gao said that “disinformation” spread throughout China and the rest of the world.

“There is misinformation, and people believe that this is a man-made—that a pharmaceutical company made the virus,” he said, adding that there were “deaths because of this misinformation.”

Redd also said there was misinformation related to treatments.

“We’re seeing instances of people trying treatments that are purported to be effective, but actually are harmful,” he said during the simulation.

During the simulated pandemic, some countries resorted to shutting down the internet to quell panic. Others worked with social media companies to censor what those states deemed misinformation.

Participants expressed opposition to internet shutdowns, but they agreed governments should work with social media companies to control the narrative.

“Governments will need to partner with traditional and social media companies to research and develop nimble approaches to countering misinformation,” the organizers stated. “For their part, media companies should commit to ensuring that authoritative messages are prioritized and that false messages are suppressed including through the use of technology.”

During and following the discussions, it was revealed that the simulated pandemic resulted in 450,000 cases and 26,000 deaths within one month, 10 million cases and 660,000 deaths within three months, and 65 million deaths in the first 18 months. Participants were urged to prep their various sectors for a similar public health crisis.

The first confirmed case of COVID-19 was found to be within weeks of the Oct. 18, 2019, simulated pandemic.

When conspiracy theories began to spread about the relationship between the two events, organizers issued a response.

“For the scenario, we modeled a fictional coronavirus pandemic, but we explicitly stated that it was not a prediction,” organizers added. “We are not now predicting that the nCoV-2019 outbreak will kill 65 million people. Although our tabletop exercise included a mock novel coronavirus, the inputs we used for modeling the potential impact of that fictional virus are not similar to nCoV-2019.”