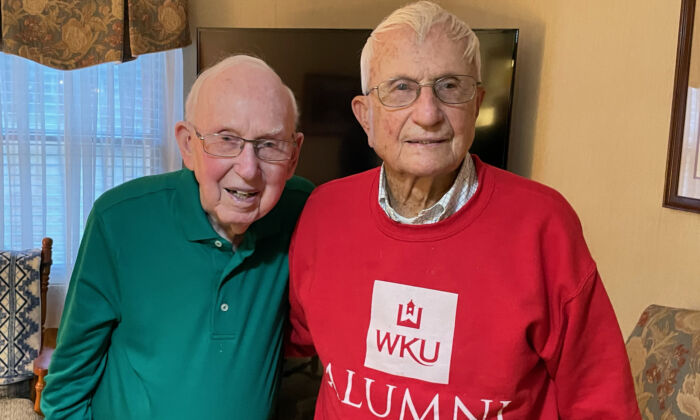 Genie Hogan, 97, (L) and Robert Simmons, 95, met on the way to boot camp in World War II and were reunited after 75 years. (Paula Ratliff/The Epoch Times)
US Features

Two veterans from World War II were reunited on Nov. 16 in Barren County, Kentucky, after more than 75 years of separation.

They grew up in the same county, although their paths had never crossed until they traveled by bus to boot camp in May 1944.

The two young men quickly became friends, challenging each other to excel while learning the demands of military life. After completing their training, they were assigned to different ships and never saw each other again.

Serendipitously, through a casual conversation at a funeral home, relatives of the men realized the two had served together and began making arrangements for them to meet.

Genie Hogan, 97, grew up in Cave City, the son of a sharecropper who served in World War I. Hogan described living in a house with no electricity or running water.

His father had to go and buy new batteries for the radio so they could listen to the news about the attack on Pearl Harbor.

As a family, they listened to President Franklin D. Roosevelt’s speech, and it inspired three of his brothers to join the military.

“I knew I would serve when I graduated. I wanted to protect our country,” Hogan said.

Robert Simmons, 95, lived in Glasgow; his father worked as an auto body mechanic and his mother was a seamstress.

“I was with my grandmother when Pearl Harbor was attacked. As we listened to the news reports, I knew I would serve,” Simmons said. “Pearl Harbor changed the course of history for so many.”

He remembers that someone told him to choose the Navy, saying, “You’ll have food and a dry place to sleep.”

When selection officers came in and said, “You, you, and you,” he was thankful his “you” went with the Navy.

“If not training or working out, we would spend time just goofing off,” said Hogan.

“The food wasn’t too great, so we would go to the canteen every night for ice cream and pie,” said Simmons.

“I still like ice cream and pie,” responded Hogan with a smile.

Hogan recalls that when he arrived in Florida, he was assigned to mess duty.

“I skipped my first assignment and went to the beach. It was my first time to see the ocean and I stayed there all night.”

The two would reunite briefly in Illinois, before being assigned to different ships. Each wondered if the other had survived as they scanned the names of the dead and the missing.

Hogan was assigned to the USS LCSL-3, which was the smallest landing craft support vessel in the fleet, with 76 sailors and five officers on board.

“It had a flat bottom so it could land on the beach and it could maneuver in places the big ships could not fit.

“However, the sleeping quarters were really tight, and I slept on the 4th bunk at the ceiling. I couldn’t sit up on my bed. I think it stunted my growth,” Hogan said.

“The ship was sometimes referred to as the ‘Mighty Midget,’ a little ant compared to the big aircraft carriers.

“Once in the Pacific Ocean, things got a ‘little tighter,’ and you had to watch for Japanese aircraft and keep the guns and rockets ready.

“By that time, the Navy and Air Force had the Japanese under control, except the suicide planes. Part of my job was to ensure that the planes did not hit the ship.”

During his time, the ship shot down at least five suicide planes and one bomber, and rescued a U.S. aviator who had been shot down, he told The Epoch Times.

What was his reward for the rescue?

“Ice cream,” he said with a smile.

Simmons was assigned to the USS LST 1033H, a landing ship that was used to transport and deploy troops, vehicles, and supplies onto foreign shores. He participated in the assault and occupation of Iwo Jima and Okinawa, as well as other battles along the way.

Simmons was there when the flag was raised at Iwo Jima.

“We took the Marines in and provided support from the sea.”

His ship later became a hospital ship after the sinking of the USS Morrison on May 4, 1945. The Morrison sank just 10 minutes after being damaged, taking 152 sailors to their deaths and leaving many wounded.

“We had a barge tied to the ship. It was floating on the water and served as a drop-off point for the injured and dead. We would pull the barge up and unload, treating those we could and shipping them to other locations for treatment.”

Hogan and Simmons both described surviving a typhoon on the Pacific Ocean while on different ships.

When the war ended, the sailors returned to Barren County, unaware of each others’ fate.

Simmons graduated from Western Kentucky University with a degree in chemistry, and moved to Paducah, Kentucky. He retired from the Paducah Gaseous Diffusion Plant. Meanwhile, Hogan moved to Louisville, and eventually retired from the L&N Railroad. He since has returned to Cave City.

The two veterans spent a recent afternoon together at Hogan’s home, reminiscing about the ships, their shipmates, the battles, the challenges, the victories, and the heroic actions of so many.

“It was wonderful to be together and to share our memories after all of these years. Let’s not wait so long the next time,” said Hogan.

As the two men parted company, their family members wiped away tears of admiration, realizing that the greatest generation is sometimes just a silent hero walking beside us, holding untold strength of survival and determination.