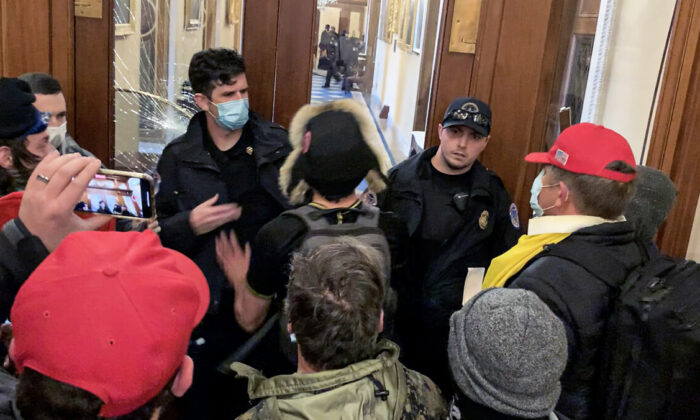 Christopher Ray Grider (at right with yellow flag tied around his neck) just before he hands a black helmet to rioter Zachary Alam at the Speaker's Lobby on Jan. 6, 2021. (Video Still/Sam Montoya for The Epoch Times)
Politics

Two men sought by the family of Ashli Babbitt as witnesses to her death at the U.S. Capitol have been identified as previously arrested by the FBI and indicted on federal charges from the Jan. 6, 2021, riots.

The family of Babbitt, 35, has been seeking to identify key participants in the hallway unrest that afternoon. The identification of Christopher Ray Grider and Chad Barrett Jones reduces by two the number of “unknowns” who witnessed the riotous behavior at the entry to the Speaker’s Lobby.

Grider, 40, of Eddy, Texas, was indicted in January 2021 on seven federal counts, including destruction of government property, disorderly or disruptive behavior in a restricted building, an act of violence in the Capitol grounds or buildings, disorderly conduct in a Capitol building, obstruction of an official proceeding, and other charges.

Grider, the owner of Kissing Tree Vineyards in Eddy, is the “Gadsden Flag Man” who was in the center of the Speaker’s Lobby hallway just feet away when Babbitt was shot to death at the U.S. Capitol on Jan. 6, 2021.

Grider was dressed in a black coat, red Donald Trump cap, and a yellow “Don’t Tread on Me” flag draped around his neck.

Video footage shows Grider was one of the first to arrive in the hallway after Babbitt and journalist Tayler Hansen. He is seen conversing with police officers during the increasingly boisterous assembly. Grider is seen on video footage handing a black riot helmet to Zachary J. Alam, which Alam uses to smash two door windows and the side window that Babbitt eventually climbed through and was fatally shot, video shows.

Grider also is charged with trying to gain access through the doors by kicking and pushing on them with his shoulder.

“The defendant remained and could be seen minutes after the shooting, leaning over the railing to get a better glimpse of Babbitt bleeding on the floor,” prosecutors wrote in a court filing. “The defendant was holding his phone over the stairway, appearing to capture a video or pictures of Babbitt.”

Grider’s case was unlike those of many Jan. 6 defendants. No FBI SWAT team visited his home, and he voluntarily surrendered.

“Did they show up at his home in Chilton, Texas, in SWAT gear with assault weapons drawn? No. Did they make forced entry into his home to arrest him in the middle of the night? No. What did they do? They called him up and asked him to come to Austin, Texas. And that is exactly what Mr. Grider did,” his attorney wrote in a February 2021 court filing.

Grider was released on bond in February 2021. He is next due in court on Feb. 10. Messages left for Grider and his attorney weren’t returned by press time.

Jones, seen on video in an orange-red jacket and gray cap, is seen allegedly using a wooden flagpole to punch a hole in the glass of the left door leading to the Speaker’s Lobby. Jones is due in court on March 10 for a status conference. Jones was released on bond pending trial. His attorney declined an interview request from The Epoch Times.

Most of the violence against the doors and windows outside the Speaker’s Lobby happened after three police officers guarding the doors left their post about 2:42 p.m. on Jan. 6, 2021.

New video footage discovered by The Epoch Times shows Babbitt punched Alam in the nose shortly before she climbs through the window. She grows increasingly frustrated watching rioters escalate their attacks on the doors and windows. She tries to intervene between Alam and a police officer, but he brushes her aside and punches a window. She made other unsuccessful attempts to deter the violence.

Alam, 29, also is charged in a Pennsylvania court with burglary. When FBI agents raided Alam’s hotel room on Jan. 30, 2021, they found nearly $5,700 in goods stolen from an area antique mall, according to a statement by the Ephrata, Pennsylvania, police department. Alam was hiding at a Lancaster County, Pennsylvania, motel when he was arrested by federal agents.

Alam, who is in federal custody, faces trial in March on the charges of burglary and theft by the unlawful taking of moveable property. Bail in that case was set at $75,000, court records show.