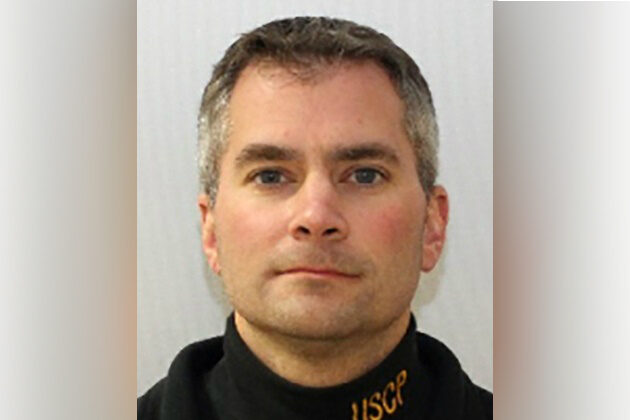 Authorities on March 15 confirmed that two suspects have been arrested and charged with assaulting Capitol Police officer Brian Sicknick, who died after the Jan. 6 Capitol breach.

Julian Elie Khater, 32, of State College, Pennsylvania, and George Pierre Tanios, 39, of Morgantown, West Virginia, were taken into custody on March 14 in connection with the incident, the Department of Justice said in a statement.

They were charged with conspiring to injure officers and assaulting federal officers, among other charges, during the Jan. 6 incident, the DOJ said. Khater was arrested after he got off an airplane at Newark Liberty International Airport in New Jersey, while Tanios was arrested at his West Virginia home.

The two were charged with one count each of conspiracy to injure an officer, three counts of assault on a federal officer with a dangerous weapon, one count of civil disorder, one count of obstructing or impeding an official proceeding, and one count of physical violence on restricted grounds while carrying a dangerous weapon and resulting in significant bodily injury, among several other charges, according to officials.

Khater and Tanios were allegedly observed in video footage on Jan. 6 “working together” to try to assault law enforcement officers “with an unknown chemical substance,” before spraying the officers in the eyes and face, according to the DOJ release.

Sicknick and two other officers “were all standing within a few feet of Khater, each reacted to being sprayed in the face” with the substance, the DOJ said. “The officers retreated, bringing their hands to their faces and rushing to find water to wash out their eyes.”

Tanios then replied, “Hold on, hold on, not yet, not yet … it’s still early,” officials said.

Khater is then seen getting a canister from Tanios’s backpack and then aiming the can at officers while spraying, according to the DOJ, citing video footage.

Tanios’s sister, Maria Butros, told the Washington Post on March 15 that her brother “was arrested for something he didn’t do. He didn’t do it. He would never do that.”

The Capitol Police stated after the breach that Sicknick “was injured while physically engaging with protesters” and collapsed after returning to his office. Then-U.S. Attorney General Jeffrey A. Rosen said in a statement that the officer died of “the injuries he suffered defending the U.S. Capitol.” Neither mentioned bear spray.

So far, more than 300 people have been charged in connection to the Jan. 6 breach. Prosecutors last week said in court that 100 more people are expected to be charged.

It’s not clear whether Khater or Tanios have attorneys.