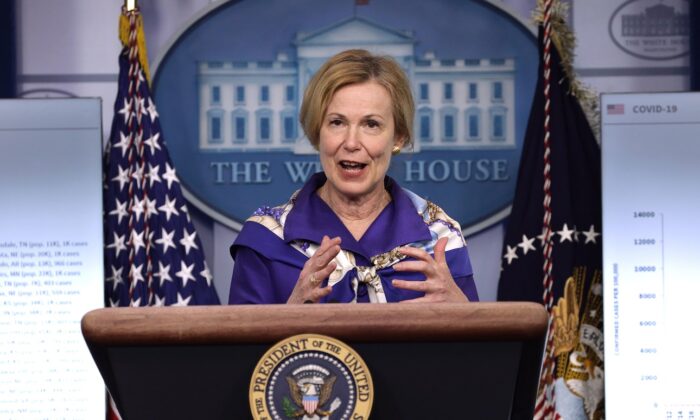 2 Excellent COVID Books for Christmas? … Why Not?

What honest person can deny that the U.S. and global responses to COVID-19—caused by what’s been dubbed here for some time as the Chinese Communist Party virus—have been an unholy mess?

Vaccines/no vaccines, lockdowns/no lockdowns, masks/no masks, social distancing/no social distancing, school/no school—it’s hard to see there has been any difference. As Alex Berenson, a man who has justifiably raised his reputation by being canceled by various Big Tech gangsters, often puts it, in the end, “a virus gonna virus.”

It’s almost as if no one had done anything, it all would have been the same—or better.

That’s the conclusion—with certain caveats—that I came to after reading two extremely informative and timely books regarding the pandemic that are being published almost simultaneously on or about Dec. 1.

They also ratified something I admittedly already believed—big government is the enemy of the people. Or, as Ronald Reagan famously quipped: “The nine most terrifying words in the English language are ‘I’m from the government and I’m here to help.’”

One of those books, “Pandemia,” is by the above-mentioned Berenson. He has been doing a yeoman’s job battling—more appropriate might be unmasking—the pronouncements of Fauci et al. while scrutinizing vaccine data and reliability in actual detail, informing us of his research via virtually non-stop emailings and his Unreported Truths Substack.

Berenson—a novelist of some note and a journalist—is a stylish writer and his book, like his email and Substack, makes entertaining reading, even though the subject matter couldn’t be more depressing.

If, as they say, journalism is the first draft of history, given the horrific propagandistic dishonesty of today’s corporate media, he also provides in “Pandemia” a chronological first draft for what we have gone through during our plague years that actually could be of use to future historians. (I think I can say, since I had little to do with it, that The Epoch Times’ coverage, particularly regarding China, also will be useful.)

I sing all these hosannas but must acknowledge that avid readers, as I have been, of Berenson’s work won’t find anything particularly new here. Basically, what he is doing is filling in the blanks for posterity.

Dr. Scott W. Atlas’s “A Plague Upon Our House: My Fight at the Trump White House to Stop COVID from Destroying America” is anything but predictable. It’s already the Amazon No. 1 best seller in “Health Policy” before its Dec. 7 publication, and deservedly so.

What Atlas has written is not only what his title implies—a narrative of how COVID-19 decisions were made in the Trump White House, to which, as a member of the COVID Task Force, he was a witness.

It’s the best insider book we have so far on the actual workings of the Trump White House in general—far better, needless to say, than the nonsense authored by the likes of Omarosa and The Mooch, not to mention the various anonymous propaganda efforts.

In fact, if Atlas were to leave the medical profession, he would make an excellent journalist/historian. And here he has a great story to tell.

It is, in essence, a tale of how the deep state—in this case, the medical deep state, an especially large part of it—can and does sabotage the decisions of the executive branch at its highest levels to the detriment of our country and the world.

No more perfect exemplars of this medical deep state exist than Drs. Anthony Fauci and Deborah Birx, both of whom have worked in leadership capacities of governmental agencies, while hardly ever treating patients, for decades.

Which leads to one of the more surprising tidbits in Atlas’s book—Fauci barely appears in it. That was evidently the subject of much internal White House eyebrow-raising, Fauci deeming himself too busy appearing on television or posing for magazines to attend those tedious decision-making meetings.

That was left to Birx, who apparently was largely responsible for the locking-down of America we all experienced for more than a year (and could again), which both Atlas and President Donald Trump opposed. In other words, although the president of the United States said no to lockdowns, when the orders came out from the CDC via Birx, there they were.

Birx emerges as the villain of the book, and, arguably, our lives and those of our children who lost schooling, didn’t have graduations, couldn’t see their grandparents, and so forth for, at this point, no apparent reason. (This is not meant to exonerate Fauci in any sense. For more on that scoundrel, consult Robert F. Kennedy Jr.’s “The Real Anthony Fauci.”)

Half the Trump White House, as Atlas notes, was paying far more attention to the political, rather than the health, ramifications of decisions. Something called the COVID Huddle existed for that purpose, never attended by scientists or doctors, except the omnipresent Birx and occasionally by Atlas himself.

Perhaps the most dramatic scene in the book has Birx actually screaming at Atlas right in front of Trump in the Oval Office. It almost seems they are going to come to blows.

Overall, Atlas, who insists he is an apolitical doctor although he does work out of the right-leaning Hoover Institute, does like Trump and admires the former president’s instincts. But there is a sense of puzzlement, and sadness, throughout the book about why the president’s decisions were not always carried through.

The mainstream media is obviously to blame for much of this in their slavish clamoring for “science,” as if they knew what it was, and their beyond knee-jerk, if that’s possible, opposition to anything advocated by Trump.

Their propagandistic behavior gave a cover to the medical deep Ssate that is carried through to the present day, augmented by the Big Tech totalitarians. (Try googling hydroxychloroquine and see if the drug gets a fair hearing as a COVID remedy, despite the highly regarded medical journals Lancet and JAMA having walked back, actually apologized for, their initial disparaging remarks.)

The larger question inevitably raised by reading both books is how we deal with the escalating scientific and technical problems of our world, including future pandemics, about which politicians, many of whom would have trouble passing a high school chemistry test, have to make judgments.

They are easy prey for the Fauci and Birxs of the world because the politicians can hide behind whatever these doctors say is, for the moment anyway, “science.” We are all, in a sense, their victims.

Buying, reading, and preserving Atlas’s and Berenson’s books won’t solve this. But they give us food for thought in the present and something to think about in the future. You might even call them great Christmas and Hanukkah gifts for those who prefer being awake to be being “woke.”