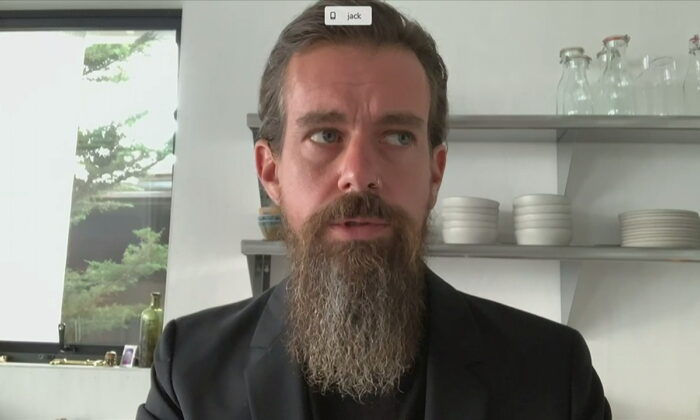 Jack Dorsey told the Senate Judiciary Committee via video conference that Twitter employees made an enforcement decision based on a policy they created in 2018 in order to prevent the social media platform from being used to spread hacked materials.

“We made a quick interpretation, using no other evidence, that the materials in the article were obtained through hacking, and according to our policy, we blocked them from being spread. Upon further consideration, we admitted this action was wrong, and corrected it within 24 hours,” Dorsey said.

The New York Post said the story about Hunter Biden was centered around a copy of a hard drive it obtained from Rudy Giuliani, President Donald Trump’s personal lawyer, who got the copy from a computer store owner in Delaware.

The owner said he took control of the computer after its owner repeatedly didn’t answer messages about picking it up.

It’s not clear why Twitter believed the material was hacked.

“They chose not to, instead insisting we reverse our enforcement action. We did not have a practice around retroactively overturning our enforcements. This incident demonstrated that we needed one, so we created one that’s fair and appropriate. I hope this illustrates the rationale behind our actions and demonstrates our ability to take feedback, admit mistakes, and make changes, all transparently to the public,” he added.

Senators pressed Dorsey and Facebook CEO Mark Zuckerberg over their increasing crackdown on users and content, many of which seem to be conservative or right-leaning.

After Zuckerberg also said a mistake appeared to happen when an advertisement was taken down, Sen. Mike Lee (R-Utah) told the technology chiefs, “Those mistakes sure happen a whole lot more on one side of the political spectrum than the other.”

Lee noted that over 90 percent of Facebook and Twitter employees who donate to federal candidates gave to Democrats.

“So, these mistakes may be mistakes, but they’re mistakes that rhyme. They may not repeat themselves, but they rhyme. And the consistent theme happens to be Republicans, conservatives, and pro-life activists,” he said.

Lawmakers are examining potential changes to Section 230 of the Communications and Decency Act, which shields technology companies from most lawsuits. The hearing was triggered by Twitter’s actions against the Post.

Senate Judiciary Chairman Lindsey Graham (R-S.C.) asserted that the situation showed how Twitter and Facebook act closer to media outlets than social media platforms at present, which would put them under the purview of laws dealing with such outlets.

“There are rules about what a television station can do. There are rules about a newspaper can do. And what I want to try to find out is, if you’re not a newspaper at Twitter or Facebook, then why do you have editorial control over the New York Post? They decided, and maybe for a good reason, I don’t know, that the New York Post” articles about Hunter Biden needed to be flagged, excluded from distribution, or made hard to find,” Graham said in his opening statement.

“That, to me, seems like you’re the ultimate editor. The editorial decision at the New York Post to run the story was overridden by Twitter and Facebook in different fashions to prevent its dissemination. Now, if that’s not making an editorial decision, I don’t know what would be.”

Graham later added, “My hope is that we change Section 230 to incentivize social media platforms to come up with standards that are transparent and opaque that will allow us to make judgments about their judgments, that the fact checkers be known, that the community standards, who sets them, what are their biases, and give some direction to these companies because they have almost an impossible task.”

Sen. Richard Blumenthal (D-Conn.), the committee’s ranking member, who helped craft Section 230, said he’s open to breaking up big technology companies because of abuse of power, as well as “meaningful reform” for Section 230.

But Blumenthal said he felt that the hearing “is certainly not the serious proceeding that we need,” alleging its purpose “seems as much to bully or browbeat” Zuckerberg and Dorsey “from taking even more responsible action by threatening cuts to Section 230.”

“I want to see real reform that will enable these abuses to be reformed because your platforms have embraced, abused, and weaponized child predators, violent white supremacists, and human traffickers. And I’ve heard heart wrenching stories from the victims,” he said.

Dorsey at one point told lawmakers that the ramped up enforcement—including repeatedly censoring President Donald Trump, while laying off his challenger Joe Biden—is actually focused “on encouraging more speech” but is, at the core, a business decision.

“What we saw and what the market told us was that people would not put up with abuse, harassment, and misleading information that would cause off-line harm and they would leave our service because of it,” he said. “So, our intention is to create clear policy, clear enforcement that enables people to feel that they can express themselves on our service and ultimately trust it.”