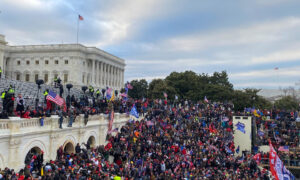 A photo shows the logo of the the American online social media and social networking service, Facebook, and Twitter on a computer screen in Lille, France, on Oct. 21, 2020. (Denis Charlet/AFP via Getty Images)
Markets

“I think that there are a lot of people who literally knew that the president was the most important person” on Twitter, he said, adding that “you had to keep checking him, and then you had to check people who talked about him.”

“And you just had this endless wave, this web that the president created, and then it was like action and reaction, so I think that the surprise factor of going to Twitter, which was of course the president, is gone!” he wrote. Trump had more than 88 million followers and his tweets typically had the most engagement in terms of retweets, comments, or “likes.”

And Investorplace noted that there are concerns of a “potential ripple effect of the company banning President Trump from its platform” that could lead to another drop in shares. The site noted that users will likely leave Twitter for other platforms out of fears of censorship.

“Beyond de-amplification, we are going to—conspiracy theories—we are going to be permanently suspending those accounts,” Gadde said in a leaked video clip. Twitter confirmed to news outlets that it was authentic.

“So a lot of our learning here has come from other markets. So in that sense, we do feel like it is—this is our global approach,” she said about the next wave of account suspensions. She added: “We need to be very focused on being able to enforce any of these policies or enforcement decisions we make at scale.”

Twitter explained that it banned Trump’s account in light of the U.S. Capitol breach. It claimed that Trump’s comments on the platform could incite violence, although Trump never called on his supporters to engage in violent acts.