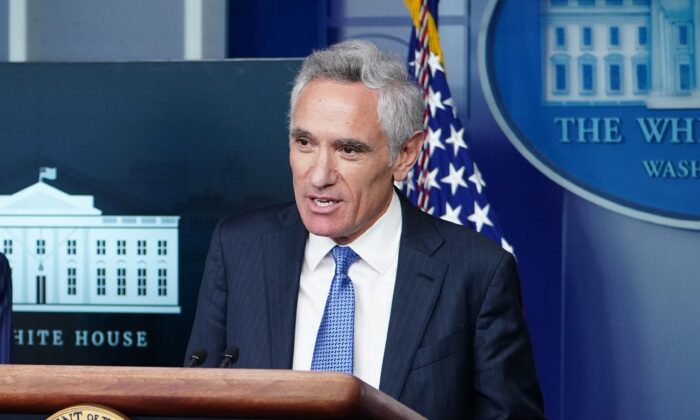 A spokesperson for the company confirmed to CNN on Oct. 18 that the post was removed. According to the spokesperson, the Twitter policy that Atlas allegedly violated prohibits sharing false or misleading content related to the pandemic.

The post, which no longer appeared on the site as of Oct. 18, was replaced with a note that reads, “This Tweet is no longer available because it violated the Twitter Rules. Learn more.”

Atlas also wrote on Oct. 17 that “the right policy is [President Donald trump’s] guideline” to “use masks for their intended purpose—when close to others, especially hi risk. Otherwise, social distance. No widespread mandates.”

Adm. Brett Giroir, assistant secretary for health at the Department of Health and Human Services, and the head of the Trump administration’s testing response appeared to issue a response to Atlas.

“And even though cases/hospitalizations are increasing, we can control #COVID19 by wearing masks when we can’t distance, avoiding crowds especially indoors, good hygiene, and smart testing of contacts and to identify/isolate those asymptomatic but infectious,” he added.

The move from Twitter follows several controversial attempts from the social media giant this week to limit or block the spread of reports about Hunter Biden, Democratic nominee Joe Biden’s son, and their family’s alleged business ties to Ukraine and China. At one point last week, Twitter locked the accounts of Trump’s reelection campaign and White House press secretary Kayleigh McEnany after they shared links to the New York Post article containing the allegations or any references to them.

That prompted the Senate Judiciary Committee to announce it will vote to subpoena Twitter CEO Jack Dorsey about alleged election interference in support of Biden’s campaign.

A day later, the Republican National Committee filed a Federal Election Commission complaint against Twitter and Dorsey, claiming that online censorship of the Post’s article about Hunter Biden’s business dealings is an “illegal corporate in-kind political contribution” to Biden’s campaign.

The committee said that it “believes that Twitter has violated [the Federal Employees’ Compensation Act] and the Commission’s Regulations by making corporate in-kind contributions to Biden for President,” according to the complaint. Fox News first reported on the filing on Oct. 16.

Trump and other Republican lawmakers have suggested that under Section 230 of the Communications Decency Act, Twitter should be considered a publisher and therefore, subject to lawsuits.