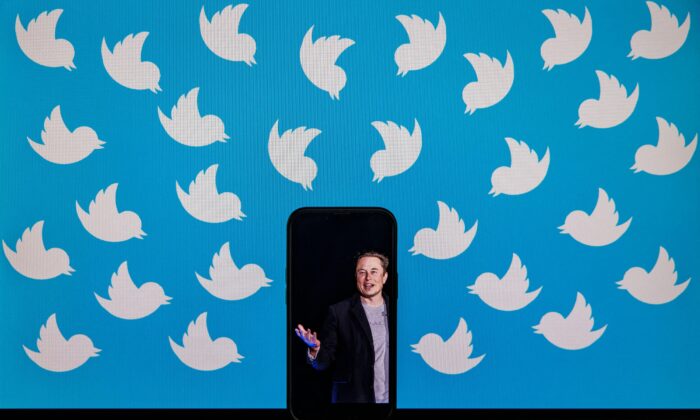 Illustration of a cellphone displaying a photo of Elon Musk placed on a computer monitor filled with Twitter logos in Washington, D.C., on Aug. 5, 2022. (Samuel Corum/AFP via Getty Images)
By Tom Ozimek

Several users reported on Friday that the new subscription option for the blue verification check mark had disappeared, while Reuters reported that a source at Twitter said the offering has been halted.

Since tech mogul Elon Musk bought Twitter for $44 billion and on Oct. 27 took control of the platform, he has sought to revamp the service. One of his moves was to announce an $8 monthly fee for a verified “blue check” while pledging to cut down on bots and eliminate deceptive practices from the platform.

He recently announced a permanent ban on Twitter users impersonating other people on the platform without specifying that they were operating as “parody” accounts.

That came after trolls rushed to take advantage of the Twitter Blue model to get verified blue checks and begin impersonating prominent figures and brands.

In one case, a blue check account impersonating McDonald’s joked that all the restaurant’s locations would “now be serving beyond meat,” before adding that “our meat is far beyond its expiration date!” according to Business Insider.

Another came from a blue check account impersonating pharmaceutical giant Eli Lilly, which reportedly put out a post saying it was “excited to announce insulin is free now,” prompting the actual Eli Lilly corporate account to apologize “to those who have been served a misleading message from a fake Lilly account.”

Since Musk took over Twitter, a number of companies have paused or pulled back from advertising on the platform.

Musk said in a post on the platform that “activist groups pressuring advertisers” had led to a “massive drop in revenue” as the company pressed ahead with mass layoffs and other changes.

“Twitter had a massive drop in revenue, due to activist groups pressuring advertisers, even though nothing has changed with content moderation and we did everything we could to appease the activists,” Musk wrote.

“Extremely messed up! They’re trying to destroy free speech in America,” he added.

Musk later said that Twitter’s mission is to become the most accurate source of information about the world, while restating his commitment to free speech even if it comes at “personal safety risk” to himself.