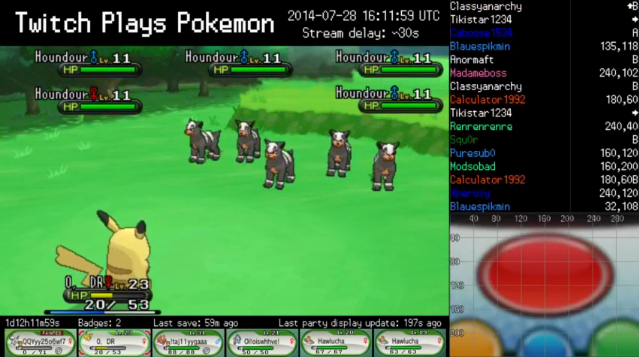 Twitch Plays Pokemon X and Y: Anarchy on Actual 3DS Instead of Emulator

Twitch Plays Pokemon takes on Pokemon X and Y on a 3DS.

An anonymous online streamer started a social project where a live Twitch audience could control the actions of a Pokemon trainer on Pokemon Red.

Using some computer scripts and an emulator, the Twitch streamer allowed people to type in GameBoy buttons (“a”, “b”, “up”, “down”, etc.) in the Twitch chat, and this would translate in the game after some delays.

The current delay for the Pokemon X stream is about about 15-40 seconds.

As this is a 3DS game, there is a touch screen element, and this can be activated by entering the coordinates in the chat, with a range of 1,1 to 319,239.

The 3DS’s Wi-Fi seems to be on, and this means that the audience can technically make Wonder Trades.

The original Pokemon Red Twitch stream had over 21 million views, and became an online phenomenon after its existence spread through word of mouth via social media.

Currently the Pokemon X stream has more than 63 million views.

The unidentified creator has not explained how he managed to hook up his stream to a Nintendo 3DS system or the capture kit he is using.

When the stream first became a hit, the creator of the experiment told gaming site Polygon that he “didn’t really have any plans for it from the beginning.”

“I just wanted to put it up to see how people would respond. I put it together and put it up on a dedicated server all within a few days.”

“I have a strong enthusiasm for all video games, but I do have strong nostalgia for the first two generations of Pokémon,” the unidentified creator added.

“I’m always thinking of other games that could be adapted to an automated Twitch stream but I don’t think Twitch Plays Pokémon’s style of input would work with any genre that isn’t a JRPG, so I’m thinking of a different input style that would be compatible with a wider range of genres.”