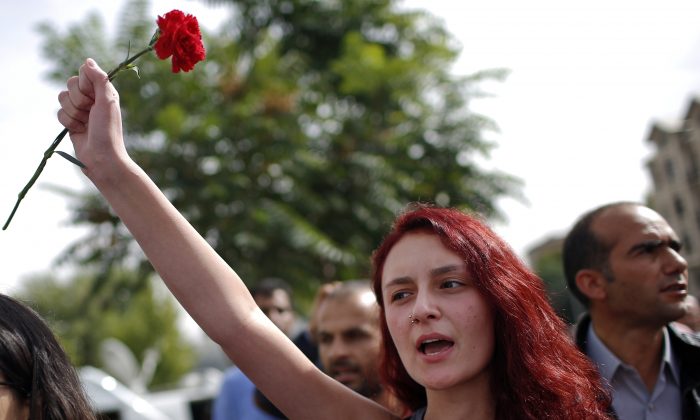 A woman participates at a memorial service for the victims of Saturday's attacks , at the site of the bombings in Ankara, Turkey, Monday, Oct. 12, 2015. (AP Photo/Emrah Gurel)
Middle East

ANKARA, Turkey—Authorities investigating the twin suicide bombings at a rally promoting peace with the Kurdish were focusing on the ISIS group, comparing DNA samples of the suspected bombers with those obtained from families of extremists they suspect could have carried out the attacks, a newspaper close to the government reported on Monday.

The government meanwhile, raised the death toll in Turkey’s deadliest attack in years to 97 and said the victims included a Palestinian. A pro-Kurdish party has said that up to 128 people died in the attacks Saturday outside Ankara’s main train station that targeted Turkish and Kurdish activists who were gathering for a rally to call for increased democracy and an end to the renewed fighting between the Kurdish rebels and Turkey’s security forces that has killed hundred since July.

The government said Kurdish rebels or ISIS extremists were likely responsible, while mourners accused President Recep Tayyip Erdogan of fomenting violence to gain votes for the ruling party ahead of the Nov. 1 elections.

No one has claimed responsibility, but the attack bears similarities to a suicide bombing the government blames on the Islamic State group that killed 33 Turkish and Kurdish peace activists near the town of Suruc bordering Syria in July.

Hurriyet newspaper said the type of device and explosives used in Ankara were the same as those used in the Suruc attack.

Yeni Safak, the paper known to be close to the government, said investigators were testing DNA samples obtained from families of some 20 Turks they believe are ISIS extremists and prepared to carry out suicide bombings.

It was not clear however, if any of the arrests were linked to the peace rally bombings.

Turkey agreed recently to more actively support the U.S.-led battle against the ISIS group, opening its bases to U.S. aircraft launching air strikes on the extremist group in Syria and carrying out a limited number of strikes on the group itself.

The bombers struck hours before Kurdish rebels battling Turkish security forces followed through with plans to declare a unilateral cease-fire, to reduce tensions leading up to elections.

Turkey’s government rejected the declaration, saying the rebels must lay down arms for good and leave the country. Turkey’s military meanwhile carried out more cross-border airstrikes against Kurdish shelters and positions in the Zap and Metina regions of Iraq.

While no one group has been ruled out in the bombings, government opponents blamed security forces for failing to protect the peace rally.