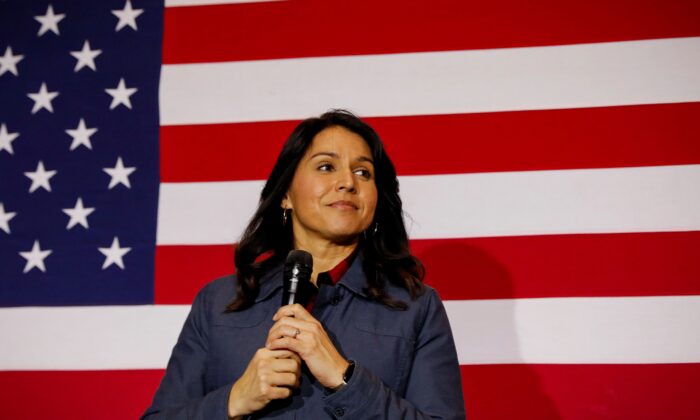 Former Rep. Tulsi Gabbard, who made headlines last week with the announcement of leaving the Democratic Party, will campaign for two other Republicans following her appearance at the Loudon event to support the Republican Senate candidate Don Bolduc, a former Army general.

Lake replied by calling Gabbard an American hero, “Truly an honor to have an endorsement from this American Hero.”

The Tuesday event will be held at a young Republican forum in Chandler, Arizona, which is located in the suburbs of Phoenix. The campaign stop will also see the participation of the state party’s nominee for attorney general, Abe Hamadeh.

Bolduc, Lake, and Masters have all received endorsement from former President Donald Trump.

When campaigning alongside Bolduc in Loudon, New Hampshire, on Oct. 17, Gabbard explained that it was the veteran’s spirit of “putting the country first” that prompted her support for him.

“I’m campaigning with Don Bolduc because I know he’s committed to putting the country and the American people first, and I think that more politicians and more people running for office would be smart to do the same,” she said in an interview with Fox News.

Gabbard further shared her commonalities with Bolduc in having a military background and conservative views.

“I think it makes every bit of sense when you look at two people who’ve dedicated our lives to serve our country, both in uniform and now in public office. It makes every sense when you look at the things, the fundamental foundational things that we share in common, which is the constitution, it’s freedom, it’s the Bill of Rights. It’s taking care of serving the needs of people here in New Hampshire and across the country.”

Voicing her support for Bolduc, Gabbard called for the crowd to “bring at least 10 of your friends along with you when it comes time to vote.”

“Her presence helps me with everybody. I think it helps me with Republicans, Independents, Democrats, Free Starters, Libertarians. It helps me across the political spectrum,” he said.

“I’m very honored to have Tulsi’s support because it just shows how two people from previously two different parties can come together,” he added.

Despite her support of the Republican nominees, Gabbard made clear her intention of not joining the GOP.

“I’m an independent, and I’ve laid out the reasons why today’s Democratic Party, that is controlled by fanatical ideologues, that stands against freedom, why it’s a party I can no longer be associated with,” she said.

In response to the question from anchor Chris Cuomo in Oct. 14 interview on News Nation: “Does that mean you will never become a Republican?” Gabbard replied, “I don’t say never to anything. I’m focused on fighting for peace and fighting to make sure that we have it tomorrow.”

The former Hawaii congresswoman who is a one-time presidential candidate also dismissed the decision to re-run for the White House in 2024.

“It is not at all on my mind, nor should it be on anyone else’s because right now people are struggling just to pay their heating bills just to make ends meet. We need to focus on the here and now and start bringing about the changes that will protect our freedom and our future.”

Hannah Ng
Reporter
Hannah Ng is a reporter covering U.S. and China news. She holds a master's degree in international and development economics from the University of Applied Science Berlin.