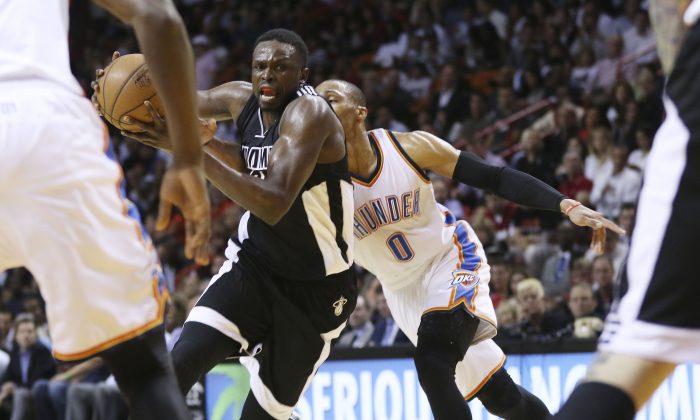 A host of NBA games are set for Tuesday and Wednesday, and the injury updates have been coming in.

The Miami Heat, struggling with injuries all year, will be without Luol Deng, who is out with a sore calf. Chris Andersen (elbow, back) is a game-time decision.

C.J. Miles is out for the second straight game due to a groin strain, reported Scott Agness. He tested it at shootaround but it was too painful to play through.

Kobe Bryant is now out for the season, and Nick Young (ankle) is definitely going to miss the game. Young sprained his ankle during practice on Monday.

The Chicago Bulls are going to be without Jimmy Butler, due to illness.. Mike Dunleavy Jr. is out.

Nic Batum, with a wrist injury, is listed as questionable for Wednesday’s game in Cleveland.

Dwight Howard will be a game-time decision against the Mavs on Wednesday.

Brandan Wright missed Sunday’s game with a sore left heel but is expected to play Wednesday against the Wizards after practicing on Tuesday, reported Paul Coro.

Deron Williams participated in non-contact portions of practice today but is listed as out for Wednesday’s game against the Hawks.

Carl Landry (wrist) practiced on Tuesday, and could play on Wednesday, per Jason Jones.