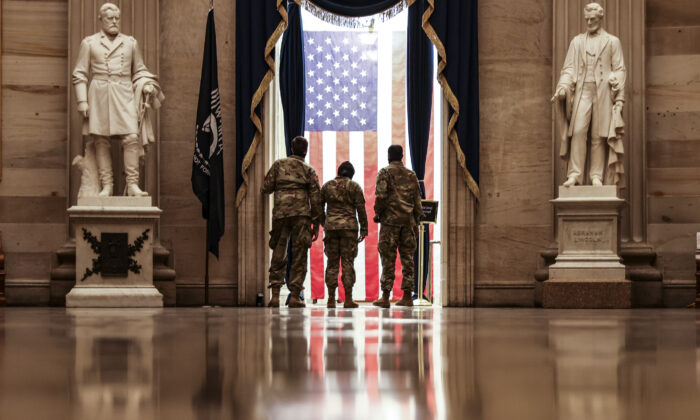 Members of the National Guard from Delaware tour the rotunda during their down time at the Capitol in Washington on Jan. 13, 2021. (Tasos Katopodis/Getty Images)
Viewpoints

Is the military more focused on winning wars, or Wokeism?

Americans shouldn’t have to ask this question.

But on account of doings of the Biden-led Department of Defense (DOD), Fox News’ Tucker Carlson was rightly compelled to proffer it. That he received any DOD response—and no less an almost parodic scolding, rather than an assurance that the military is singularly focused on crushing our enemies—demonstrates an existential problem for our country.

It shows that the progressives’ Long March through our institutions is reaching its dangerous apex.

This is a dangerous apex because when it comes to matters of national security and foreign policy, politicization literally kills.

Our military must be impervious to politicization, and particularly political correctness and insubordination, or it will lack the will and capability necessary to deter and when necessary defeat our adversaries.

Absent a military insulated from these ills, our peace and prosperity will erode. People will die.

Yet for well over a decade now, perhaps the last trusted institution in this country, the military, has shown dangerous signs that it’s succumbing to the maladies of all of our other institutions.

This is an indictment not of our cherished military itself, but of those who have tarnished it through repudiating its core principles, and the civilian leaders who have abided by such conduct, if not endorsed it.

The Tucker Carlson–DOD contretemps broke this reality right out into the open for all of America to see.

Carlson highlighted President Joe Biden’s lauding of military progress on “creating maternity flight suits,” and “updating requirements for their [women’s] hairstyles,” Defense Secretary Lloyd Austin’s efforts to root out ill-defined “extremism” in the military ranks, and a U.S. Navy reading list that includes among its foundational texts for sailors the likes of discrimination-defending professor Ibram X. Kendi’s execrable “How to Be an Antiracist.” Navy initiatives flowed naturally from this list.

Could a military focused on so many items other than fostering the strongest, toughest, and smartest fighting force in the world, he wondered, really compete with a deathly serious communist China?

The DOD’s response, a news story, titled “Press Secretary Smites Fox Host That Dissed Diversity in U.S. Military” that completely mischaracterized Carlson’s argument as an attack on women rather than on identity politics, and a defense of merit—replete with images of female soldiers of varying backgrounds—proved his point.

That active servicemen and women piled on to the attack via their social media accounts only lent further credence to it.

This is to say nothing of the politicization evident in that the U.S. military is now considering easing its fitness standards, for which women tend to lag significantly behind men.

Maybe this all shouldn’t be surprising. Maybe the military is just following in the footsteps of a commander-in-chief who believes America is systemically racist, that white supremacism and extremism constitute our greatest scourges, and that—consistent with many of his executive orders—progressivism ought to pervade every aspect of the federal government. And why should we expect a military not to conform to the culture of the government?

But the truth is, the politicization of our military predates Biden and a Democrat-dominated legislative branch.

We just witnessed four years of insubordination, obstruction, and worse up and down the ranks of our military—to say nothing of our intelligence and foreign policy apparatuses.

Those four years concluded with the National Guard apparently not deploying due to “optics”—that is, politics—in advance of the Capitol Riot, the urgings of then-President Donald Trump notwithstanding.

Consider what came before that episode.

Lt. Col. Alex Vindman of Trump’s National Security Council led an impeachment effort effectively on the basis of his opposition to a foreign policy decision that wasn’t his to make.

Trump’s special envoy to Syria Jim Jeffrey admitted deceiving the president on troop levels there, by “playing shell games to not make clear to … leadership how many troops we had.”

Several former senior military officials openly entertained scenarios in which the military would have to remove Trump from office should he lose the 2020 election.

Retired generals engaged in unhinged attacks on Trump, likening him to Mussolini, drawing parallels between his administration and Hitler’s Nazi regime, and accusing the president of being a Russian traitor—arguably in violation of the Uniform Code of Military Justice.

There was continuity in the reading lists within the armed services between Presidents Trump and Biden as well. In 2020, the then-director of the Defense Intelligence Agency reportedly endorsed Robin DiAngelo’s “White Fragility”—an anti-racist bible on the level of Kendi’s—apparently eschewing A.T. Mahan, Carl von Clausewitz, and Sun Tzu. To ensure the next generation of warfighters gets its share of leftist indoctrination, we learned that West Point was requiring cadets to read about critical race theory and queer theory in one of its leadership courses. Related policies abounded.

Before Trump, there was President Barack Obama. His administration systematically downplayed the threat of Islamic terror, and fired those in the military who presented competing opinions about the size, scope, and nature of the threat.

It purged training materials on the jihadist’s threat doctrine, and even related law enforcement records. It continued a war in Afghanistan for—per the Afghanistan Papers—largely political reasons. It instituted suicidal rules of engagement that put the lives of our adversaries first.

When, early in the Obama presidency, in November 2009, Maj. Nidal Hasan shot and killed 13 people, and injured 30 more at Fort Hood, Texas, that alone should have told us that something had gone very wrong in our armed forces. This was an individual whose business card bore the markings of an Islamist, reading “SoA (SWT)”—“Soldier of Allah,” with “SWT” an acronym for Subhanahu Wa Ta’ala, Arabic for “The most glorified, the most high.” Hasan delivered disturbing presentations to his peers regarding Islamic law, jihadism, and the implications for the military while serving as a psychiatrist at Walter Reed Army Medical Center.

His activities drew the Federal Bureau of Investigation’s notice, yet he remained in our armed forces, and it enabled him to carry out a deadly assault. The DOD declared his jihadist act “workplace violence.” The then-chief of staff of the U.S. Army, Gen. George Casey, declared that “what happened at Fort Hood was a tragedy but I believe it would be an even greater tragedy if our diversity becomes a casualty here.”

Carlson has done yeoman’s work in drawing attention to the perverse politicization of our military, which can only have the effect of undermining morale and warping the military’s culture, causing dissension and disorder within its ranks, blinding America to the threats we face, and deterring the talented from joining—all ultimately weakening our national security and leading to the future loss of American lives.

But the sobering truth is that this problem has been festering for years.

Stopping the Long March through our military, and indeed all of our institutions, and reversing it, is the essential task of our lifetime.