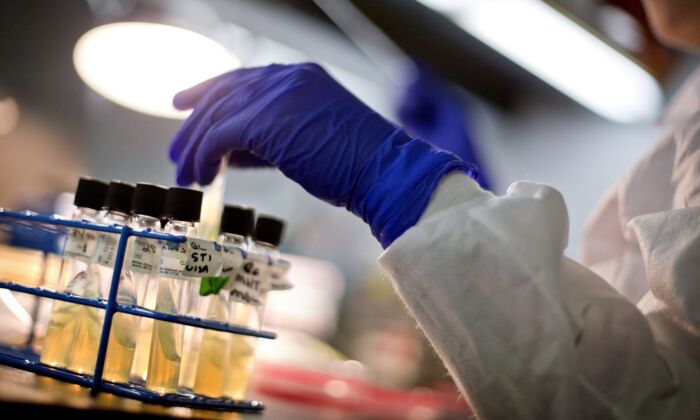 A microbiologist works with tubes of bacteria samples in an antimicrobial resistance and characterization lab at the Infectious Disease Laboratory at the Centers for Disease Control and Prevention in Atlanta, Georgia, in a file photo. (AP Photo/David Goldman)
US

Tuberculosis Makes Comeback in US Amid Misdiagnosis and Illegal Immigration

One of the world’s leading killer infectious diseases—tuberculosis (TB)—is surging in the United States with cases rising more than 9 percent last year.

At present, an estimated 13 million people are living in the United States with latent TB infections, according to the Centers for Disease Control and Prevention (CDC). TB kills upward of 12 percent of those who’ve been infected.

Some of the underlying causes contributing to the recent spike in cases are misdiagnosis as COVID-19 by health care professionals and the ongoing illegal immigration crisis at the U.S. southern border.

“TB, globally, is one of the most common infections resulting in disability and premature deaths around the world,” infectious disease expert Dr. William Schaffner told The Epoch Times.

Schaffner is a professor in the Division of Infectious Diseases at the Vanderbilt University School of Medicine in Nashville, Tennessee. He said that while some commonalities are shared between TB and COVID-19, one specific characteristic helps identify the former.

“Both affect the lungs, but the longer duration of TB symptoms distinguish it directly.”

The CDC says that part of the reason for the rise in reported cases in 2021 could be misdiagnosis as COVID-19.

Meanwhile, U.S. states are seeing a rise in TB cases that began last year and have continued into 2022. Some of the states with a growing number of reports include Washington, Texas, and California.

“It’s been 20 years since we saw a cluster of TB cases like this,” says Dr. Tao Sheng Kwan-Gett, Washington state’s chief science officer.

On April 28, Washington state’s Department of Health (DOH) reported the largest outbreak of TB in nearly two decades. Cases rose notably, catching the eye of the DOH in 2021, when 199 cases of TB were documented in the state, which was a 22 percent increase from the previous year.

This year, 70 cases of the highly contagious disease have already been reported, 17 of which can be traced to several state prisons.

Echoing the position of the CDC, Washington’s DOH also attributed the spike in TB to widespread disruptions in public health and health care services. They also say missed diagnoses due to similarities in symptoms between TB and COVID-19 were likely.

“The pandemic has likely contributed to the rise in cases and the outbreak in at least one correctional facility,” Kwan-Gett said.

He noted that increased access to testing and treatment is vital in controlling the outbreak.

Not Some Bygone Ailment

Sarah Fortune, the John LaPorte Given professor of immunology and infectious diseases at Harvard University, is an avid proponent of TB awareness. This is important as health organizations continue battling the disease, which many people think is just a holdover from antiquity, like smallpox.

“TB is the great infectious disease that nobody ever thinks about,” Fortune said during an interview on March 24 for World TB Day.

“If you asked 100 people on the street in Boston about TB, most people would say that it had been eliminated in the 1960s or so.”

That perception is dangerous, Fortune says. She maintains the threat of TB is very much a present-day concern.

“Between one-quarter and one-third of the world’s population is latently infected with TB. … Each year, roughly 10 million get sick, and 1 million die. And many of them are children.

“There are hotspots for multidrug-resistant TB in Ukraine, Moldova, and Belarus. So it’s not just COVID that’s upending TB treatment, but also the war between Russia and Ukraine.”

The World Health Organization shares this assessment in a 2021 Global TB report, noting that deaths from the disease have increased for the first time in more than a decade.

And the institute places the blame squarely on the COVID-19 pandemic.

They cited a prolonged disruption in access to TB services and the reduction of critical health care resources as two of the primary culprits for the surge in deaths.

Pandemic-related lockdowns that restricted access to treatment for the disease were also a factor.

“This report confirms our fears that the disruption of essential health services due to the pandemic could start to unravel years of progress against tuberculosis,” said WHO Director-General Dr. Tedros Adhanom Ghebreyesus.

Though misdiagnosis and lack of treatment during the pandemic account for some of the inflated case numbers and deaths, the U.S. immigration crisis also plays its part.

Two states that are experiencing comparatively high TB caseloads, California and Texas, are also struggling to hold back a tide of illegal immigrants.

U.S. Border Patrol documented over 1.6 million encounters with migrants along the southern border with Mexico in the 2021 fiscal year. This is the highest annual total on record.

Based on the areas experiencing the surge in TB reports, some of the migrants appear to be bringing the pathogen with them.

In Texas, Latinos comprised 50 percent of reported TB numbers, according to the state’s Department of Health Services. El Paso and Hidalgo are among the 10 counties with the highest reported TB cases; both counties directly border Mexico.

On the other side of Hidalgo county is the Mexican state of Tamaulipas, which serves as a migration waypoint along the northern route to the United States.

Historically, it also has the second-highest occurrence of TB in the entire country.

During an official study conducted from surveillance data in Tamaulipas from 2006 to 2013, immigrants comprised more than 30 percent of TB patients. The study also indicated that of the migrants surveyed, the majority specified cities along the U.S. border as their intended destinations.

In response to the spike in cases this year, the Texas Biomedical Research Institute announced on March 29 that it would host one of the country’s leading TB research training programs. For field research, the program will also collaborate with San Antonio’s Heartland National TB Center, the only freestanding TB clinic in the United States.

“California and Texas are the top two states in the country with cases of TB,” said Texas Biomedical President Larry Schlesinger.

“TB is not a phenomenon ‘over there.’ It’s actually over here.”

Meanwhile, California documented 1,750 new TB cases in 2021, which is a 3 percent increase from the previous year. San Diego County, which shares a border with Mexico, continues to boast the highest rate of the disease in the state, more than twice the national average.

Data from a 2020 study indicated that 71 percent of San Diego County TB cases occurred in people born outside the United States.

The disease rate among people born in another country was an astounding nine times higher than in U.S. citizens.

That’s partly because the disease can have a long incubation period. It can take weeks, months, or even years after a person becomes infected to present symptoms. This makes it difficult to identify people carrying the disease without proper testing.

And it becomes even harder among a population entering the country illegally.

The illegal immigration crisis in the United States has stretched the resources of Customs and Border Protection officials to the limit.

“We’re at a breaking point,” says Brandon Judd, president of the National Border Patrol Council. He pointed to the miles of unpatrolled and open frontier with Mexico, which sees more than 200,000 illegal entries per month.

While TB cases are still very prevalent in places such as Central and South America, Asia, and India, Schaffner noted that the United States has done an admirable job of controlling the disease within its borders.