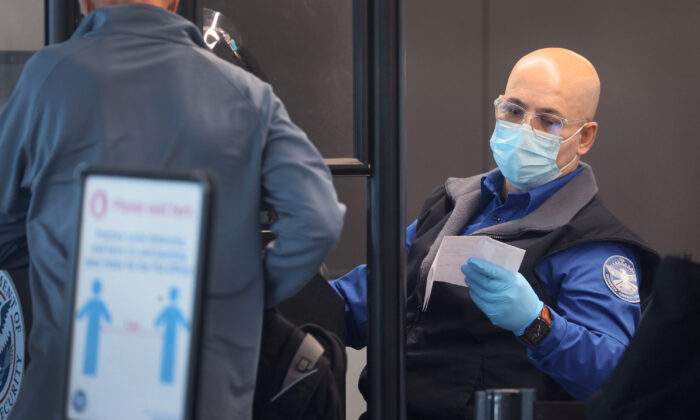 The Transportation Security Administration (TSA) has acknowledged it has allowed illegal immigrants to present arrest warrants as identification to get on airplanes, but defended it as a longstanding practice.

When illegal immigrants and other non-citizens and non-U.S. nationals “do not otherwise have acceptable forms of ID for presentation at security checkpoints, TSA may also accept certain DHS-issued forms, including ICE Form I-200 (Warrant for Arrest of an Alien),” a TSA spokesperson confirmed to The Epoch Times in an email.

The TSA is part of the Department of Homeland Security (DHS), which also includes Immigration and Customs Enforcement (ICE).

The form in question states that probable cause was found to indicate an immigrant is illegally in the country and directs immigration officers to remove them.

After being presented with a DHS form, the TSA says agents confirm the identity of each individual by verifying information found on the forms using data from Customs and Border Protection, another DHS agency.

The practice was first reported by the Daily Caller.

The TSA spokesperson, though, defended the policy, noting that it’s been in place since shortly after TSA was created in 2001, in the wake of the 9/11 terrorist attacks.

Still, the policy drew criticism this week, including from Rep. Lance Gooden (R-Texas).

“President [Joe] Biden is putting millions of Americans at risk by allowing known criminals and potential terrorists to fly on U.S. airlines. A criminal alien shouldn’t be allowed to board a plane after presenting a warrant for their arrest. They should be detained and brought before a judge,” Gooden, who said he went to the U.S.–Mexico border and witnessed illegal immigrants boarding planes without proper identification, said on “Fox & Friends” this week.

Matthew Tragesser, a spokesman for the Federation for American Immigration Reform, told The Epoch Times in an email that the policy is “an affront to American citizens, and greatly jeopardizes our national security.”

“In no way, shape, or form would an American citizen be allowed to board a U.S. flight simply by flashing an arrest warrant. If anything, that would cause immediate concern for law enforcement officials. This unconscionable move by the Biden administration aids and abets criminal behavior. Rather than facilitate illegal immigration deep into the interior, the administration should look to deter it as more than 2 million individuals attempted to enter the country unlawfully during its first year in office—an all-time record,” he added.

Under Biden, the United States set records for the most illegal immigrant apprehensions at the U.S.–Mexico border for both a fiscal year and a calendar year.

Biden, a Democrat, and top officials in his administration have dramatically altered or ended key Trump-era policies since taking office, including stopping construction of the border wall and curtailing the use of health emergency powers to expel illegal aliens.

Correction: A previous version of this article inaccurately described TSA’s policy. The agency is continuing to allow illegal immigrants to present I-200 forms. The Epoch Times regrets the error.