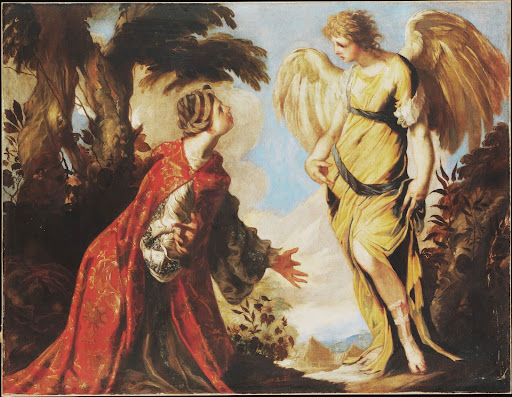 “Hagar and the Angel,” circa 1657, by Francesco Maffei. Oil on canvas; 41 3/4 inches by 54 inches. The Metropolitan Museum of Art, New York City. (Public Domain)
Arts & Tradition

Trusting in God’s Path for Us: Francesco Maffei’s ‘Hagar and the Angel’

Reaching Within: What traditional art offers the heart
BY Eric Bess TIMEOctober 25, 2022 PRINT

How might we confront these difficult times so that we spread love and care despite our hardships? I think the story of Hagar and Ishmael may provide insight into this question.

The Fate of Hagar and Ishmael

In Judaic literature, Abraham (meaning “father of many”) was married to Sarah, but they could not have children.

As the story goes, God promised to give Abraham a son who would father a great nation, but had yet to deliver. After the couple wandered for decades and Sarah began losing hope of bearing a child, she suggested that Abraham have a child with Hagar, their maidservant.

Abraham agreed with Sarah’s proposal, and Hagar became pregnant. Hagar, however, now that she was pregnant, despised Sarah. Sarah did not like this change in Hagar and was rude to her in return, which caused Hagar to run away.

When Hagar was alone, an angel approached her and told her to return to Sarah and submit to her. The angel assured Hagar that God was with her and that she would have a son, Ishmael, who would have many descendants. Hagar, comforted by the angel, returned to Sarah.

Later, when Abraham was 100 years old, Sarah gave birth to Isaac, the son God had promised them. One day, however, Sarah overheard the now-young teenager, Ishmael, mocking them. Sarah demanded that Hagar and Ishmael leave them for good.

Abraham didn’t want them to leave, but God said to let it be so. Abraham followed God’s command and gave Hagar and Ishmael food and water before sending them away. Hagar and Ishmael took the supplies and disappeared into the wilderness.

Soon, however, they ran out of water. Hagar couldn’t endure watching her son die of thirst, so she hid him under some bushes and tried to run away.

An angel heard Ishmael cry and asked Hagar what was wrong. She explained the situation, but the angel reassured her that God was with her and her son, and there was no need to be afraid.

Then, the angel showed Hagar a water source where she and Ishmael could drink. They drank and continued their journey. Ishmael would later become an archer and marry an Egyptian woman to father a great nation and many descendants, as God had promised.

Francesco Maffei’s ‘Hagar and the Angel’

The Venetian artist Francesco Maffei depicted the moment when the hopeless Hagar is comforted by an angel, who reassures her that God is with her.

Hagar is depicted in red and gold brocade. She places her son in the darkness beneath the tree behind her, and leaves the boy to die. Maffei depicted the boy as a helpless baby, possibly to have us empathize with her plight.

Just in time, the angel appears in front of her and consoles her. Hagar kneels, looks up at the angel, and opens her arms as if to receive the angel’s message.

The angel, dressed in golden yellow, faces Hagar and sympathetically looks down upon her.

The angel subtly points to the source of water that will save Hagar and Ishmael’s life, at the bottom right of the composition. For the water, Maffei depicted thin lines of white coming from behind the foliage and splashing off the ground to the right of the angel’s foot, which can be easily missed if the viewer isn’t looking for it.

There is a path between Hagar and the angel, and buildings can be seen off in the distance.

Hagar was going to leave behind her only son to die because she thought she didn’t have the means to care for him. However, she was wrong. God was with her and Ishmael, and they were both blessed.

To me, this story reminds us that despite how difficult our lives may become, or how hopeless things may seem, God is with us. Knowing this, we can be confident that our lives will unfold according to God’s will, and therefore there is no reason to be afraid.

Hagar and Ishmael are dying of thirst, but we don’t have to take this literally to gain some understanding. Maybe their thirst is spiritual. Is this why it takes God’s angel to point out the source of water that would otherwise be easily overlooked? Is the source of water that the angel points to a source of spiritual sustenance? If so, this might also suggest that the things we need from God may not be as readily apparent as we may think. That is, maybe God works in mysterious ways, and maybe we can find sustenance from God in places we might otherwise overlook.

Whatever the case may be, I think we have to trust in God, be open to the path chosen for us, and respect life along the way. Does the path between Hagar and the angel represent the journey that God has destined them to take? Does their newfound water source—their spiritual sustenance given to them by God—inaugurate the next step in their journey ahead?

Indeed, sometimes things seem difficult or even impossible, but if we trust in God, there is always another path ahead.