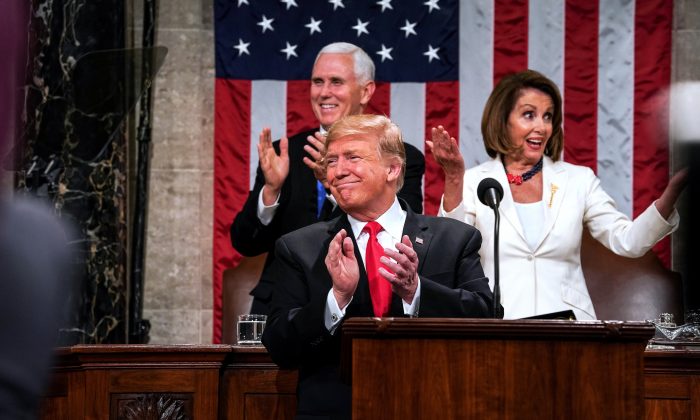 President Donald Trump, Speaker Nancy Pelosi and Vice President Mike Pence applaud during the State of the Union address in the chamber of the U.S. House of Representatives on Feb. 5, 2019. (Doug Mills-Pool/Getty Images)
Viewpoints

Trump’s SOTU Reminds Us That by Uniting, We Can All ‘Choose Greatness’ 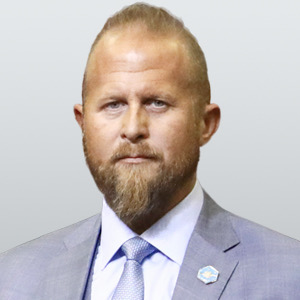 The president’s hopeful State of the Union address was a welcome respite from the ceaseless barrage of division, cynicism, and pessimism that Americans are subject to every day from the swamp in Washington.

The speech served as a reminder that, whatever disagreements our two parties may have, the democratic institutions that allow us to peacefully resolve them remain strong.

While confidently presenting his vision for the future, President Donald Trump pushed aside Washington’s bitter divisions as much as possible. He sought to remind us that Americans, no matter how they vote and which news networks they watch, have much more reason for optimism than fear, and more to gain from unity and patriotism than from partisan animosity.

In 2019, the state of the union is indeed strong, despite our tendency to focus exclusively on the problems we face. America is experiencing the strongest economic growth since the Great Recession, the healthiest job market in almost 50 years, and the strongest wage growth for hard-working Americans in a decade.

We’re also making progress in tackling the problems that still plague our country. For example, the data indicate that we’ve turned a corner on the surge in violent crime we saw in 2015 and 2016, even in particularly hard-hit places such as Chicago.

More impressive still, we were able to achieve that while enacting historic, bipartisan prison reforms that protect our communities while ending decades-old injustices. President Trump was able to invite the first person released under the FIRST STEP Act, Matthew Charles, to the Capitol to hear his State of the Union address. Charles served 23 years of a 35-year sentence imposed for selling crack cocaine, during which time he found God, became a law clerk, and mentored fellow inmates.

Following President Trump’s enthusiastic endorsement of the measure last year, both parties in Congress came together to pass the package of proven, common-sense reforms that will allow prisoners like Charles to earn their way back into society’s good graces while helping to reduce the rampant recidivism that drives crime rates up.

The president’s State of the Union address also held out the promise of many more such bipartisan victories, but those can only be achieved if we can set aside what divides us and cling to what unifies us.

Luckily, there is much that we can still agree on, even in the current political climate.

For instance, President Trump proposed a new initiative to fix our country’s outdated and neglected infrastructure, and asked both parties to help find a solution that will bring down the prices of health care and prescription drugs.

Even on the issues that divide us most, such as illegal immigration, border security, and trade, Americans across the political spectrum share a common goal of justice, safety, and prosperity. The president asked Congress to build on those shared ideals, rather than continue to let partisan differences distract from the important work that needs to be done in this country.

“Together, we can break decades of political stalemate. We can bridge old divisions, heal old wounds, build new coalitions, forge new solutions, and unlock the extraordinary promise of America’s future. The decision is ours to make,” the president told Congress and the nation.

Whether our elected officials live up to that inclusive vision will be determined over the next two years. But, for this moment at least, the opportunity to do as the president urged and “choose greatness” is there for the taking by all.

Brad Parscale is the campaign manager for Donald J. Trump for President, Inc.