Trump’s Role in House GOP Depends on Whether He Runs for President: McCarthy 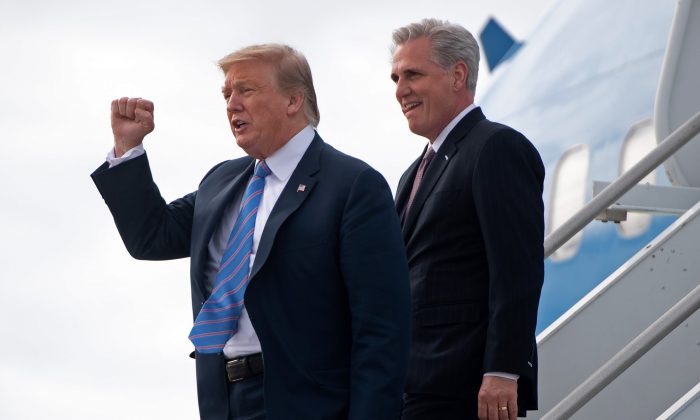 Former President Donald Trump will likely play a role with Republicans after the 2022 midterm elections but the size of the role will depend on whether Trump runs for president in 2024, the top GOP member of the House of Representatives says.

“I assume he’s going to play some role,” Rep. Kevin McCarthy (R-Calif.) told The Washington Times. “I think that he’s very helpful right now with us, for our campaign. And I know the president will always be on a policy stage.”

Republicans expect to flip both the House and the Senate in the upcoming midterm elections.

Trump’s influence on the party, regardless of the electoral outcome, will depend on whether the former president tries for a third time for the presidency after winning once and losing once, McCarthy added.

“He has not made a decision yet whether he runs or not, and that would determine that question,” McCarthy said.

The top Republican in the House was speaking during the House Republican Conference in Florida, which Trump did not attend.

Trump has not committed to running or not running in 2024, saying he would announce his decision after the midterms.

But he repeatedly hinted he will run, potentially leading to a rematch with President Joe Biden.

Trump did not respond to an inquiry regarding McCarthy’s remarks.

McCarthy told the Washington Times that he speaks regularly with Trump and that the former president plans on meeting with Republicans, including members of Congress, at a fundraiser in Dallas, Texas in April.

Unlike Senate Majority Leader Mitch McConnell (R-Ky.), McCarthy seems to have maintained good relations with Trump after his presidency, including meeting with him at his Mar-a-Lago resort in Palm Beach.

During the conference, Republicans spoke favorably of Trump’s time in office.

Rep. Garret Graves (R-La.) told reporters Friday that emissions went down under Trump and asserted that America’s energy security was much better during the Trump administration than under Biden.

Rep. Brett Guthrie (R-Ky.) during one event praised Operation Warp Speed, the effort to speed up the production of COVID-19 vaccines and treatments that was started during Trump’s time in office.

“We all know the border is wide open. We know that happened on Jan. 20, through a stroke of the pen by the president, who rolled back a lot of border issues that were working,” Katko said.