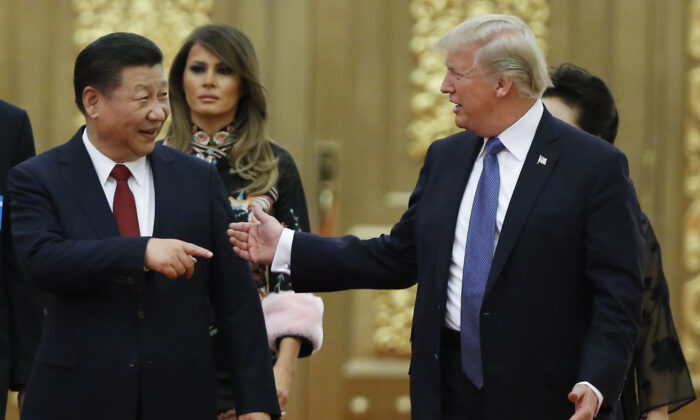 President Donald Trump and Chinese Communist Party leader Xi Jinping arrive at a state dinner at the Great Hall of the People in Beijing on Nov. 9, 2017. (Thomas Peter/Getty Images)
Viewpoints

Trump’s Road to Victory Is Through China

Brad Pascale is out as campaign manager, meaning something is rotten in the State of Trump.

That something is the poll numbers, trust them or not. The president cannot afford to rely on the assumption the country is filled with closet Trump voters loath to admit their preference lest they suffer retribution that these days can range from job loss to (no exaggeration) rigor mortis.

Pascale is being replaced by GOP veteran Bill Stepien but the election won’t be decided by campaign managers. It will be decided by the candidates.

Trump has to resist the temptation to relive the glory of 2016, as amazing a campaign as it was. As a television personality, he should realize it’s a new season. He needs a fresh approach.

But first he must abandon, at least for now, what I called his “signal-to-noise” problem. No more pointless tweets attacking the likes of Joe Scarborough. Who cares? No distractions in general.

As Magic Johnson used to say, this is “winnin’ time.”

And the road to winning is through Communist China.

They are the ones causing all the trouble in the world today, especially in the USA, but basically everywhere. Almost every contemporary problem stems from China in some manner, if you examine it carefully.

The novel coronavirus—we still don’t know whether man made or accidental—emanating in secrecy from that country has created a global health and financial calamity that in turn helped instigate (through unemployment and a frustrated, locked-up public) the escalating violence and murder in most of the major cities in the United States.

In a very real sense, the defund the police movement is due to Communist China. No one thought of that before the CCP virus came calling.

Even the issue of whether our kids should be going to school this fall is due to the CCP, if you examine how all this came to be.

China, at this time, is an adversary far greater and ultimately more threatening than even the Soviet Union in its heyday.

They have infiltrated our finest educational institutions to an astonishing degree that we are only beginning to understand. In a very real way, they have been propagandizing us for years with the acquiescence of officials of our greatest universities.

The president must make that one hundred percent clear to the American public that has been brainwashed by a media that will say anything that would aid in his defeat.

It’s not an easy assignment in a short time.

Successfully done, however, this will win the election for Trump because, as luck would have it, or perhaps it’s something more sinister than that, his opponent, Joe Biden, has been tied intimately to our failed, corrupt and highly dangerous Communist China policy for years.

The former vice president was high up among the many officials of our country that have been selling us out to China for decades.

Only a few months ago Joe was pooh-poohing the idea that China was our competition. You may have seen the video. He went so far as to say their success was important to the world and would make things better. (Perhaps he meant his son’s bank account.)

Trump can make a case for being the first president to confront Communist China in any serious way because he was and is.

Tie China to the plagues of today, make it clear what that means—it’s not that difficult—and he will have a second term.

Roger L. Simon is an award-winning novelist, Oscar-nominated screenwriter and the co-founder of PJ Media.