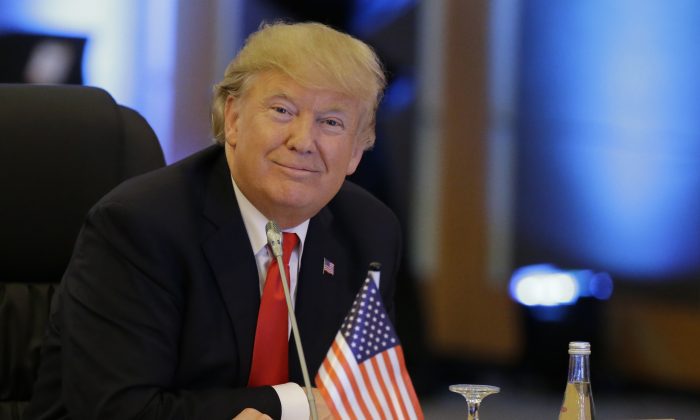 The president’s trade proposal will benefit American workers, the American nation, and our trading partners

At the Asia-Pacific Economic Cooperation forum in Danang, Vietnam, on Nov. 10, President Donald Trump reiterated his “America first” trade philosophy to the business leaders of APEC countries. “I am always going to put America first, the same way that I expect all of you in this room to put your countries first,” he declared.

This is a dramatic departure from the previous U.S. trade paradigm that pushed international trade in so-called “free trade” agreements, which were never free and put America at a disadvantage. This doctrine of globalization led to trillions of dollars in trade deficits for the United States, transferring an astronomical amount of wealth to other countries.

Elites argued that American workers, like capital and natural resources, were simply a resource that should be allocated by the global market. Consequently, American manufacturing jobs moved to low-cost countries en masse, leading to the decimation of the once vibrant Rust Belt states and contributing to what has become the opioid crisis in America.

American CEOs of multinational corporations, for example, argued that global trade created wealth for Americans. They were not completely wrong. According to the Federal Reserve Bank of St. Louis, the annual average of American corporate profits after taxes soared from $482 billion in 2000 to $1,651.1 billion in 2015, a whopping increase of 242.6 percent.

But American workers did not benefit from the boom. In the same time period, the American median household income decreased from $58,544 to $57,230. The share of middle-class income in the total national income shrank from 47 percent in 2000 to 43 percent in 2014.

Where did the profits go? Western executives, corporate directors, bankers, and real estate owners and developers made billions. Corrupt government officials and their cronies in the developing countries got filthy rich. The richest and the most exclusive club in the world is perhaps China’s show-parliament, the National People’s Congress, which has about 100 billionaires.

The situation is not sustainable. The middle class is important for our economy due to its consumption. What’s more, research shows the middle class is the major driving force behind human capital development, such as education, innovation, and entrepreneurship, which leads to long-term and sustainable economic growth.

In his APEC speech, Trump made clear that the old international trade order can’t continue. He laid out his vision of a new order under America’s leadership. Under the new order, the United States will actively engage our allies and trade partners, building a truly fair, open, and mutually beneficial trade system.

America will overhaul its approach to forging trade agreements. “What we will no longer do is enter into large agreements that tie our hands, surrender our sovereignty, and make meaningful enforcement practically impossible,” Trump said. Instead, the United States will seek bilateral agreements with “like-minded partners.”

“The large agreements” Trump refers to likely include the World Trade Organization (WTO). The organization has an agency to settle disputes among member countries. Its interests are not necessarily aligned with America’s, potentially creating conflicts between its decisions and U.S. laws. Earlier this year, the Trump administration announced it would ignore WTO rulings that it believed violated U.S. sovereignty.

Like other international organizations, the WTO is a “one nation, one vote” bureaucracy, which is extremely inefficient. The WTO’s most recent negotiation on trade barrier reduction, the Doha Development Round, started in 2001, but essentially stalled.

In addition, the WTO lacks enforcement power. One example is China’s intellectual property violations. Back in 2007, the United States filed a complaint with the WTO against China for its failure to protect and enforce U.S. intellectual property. A WTO panel ruled in favor of the United States in 2009. According to the Office of the U.S. Trade Representative’s 2016 report to Congress, however, the problem has persisted, despite the clear WTO judgment against China.

One guiding principle of the new order is that trade must be “fair and reciprocal,” the president emphasized.

“While we lowered our trade barriers, other countries didn’t open their markets to us,” Trump said.

Some nontariff trade barriers are more consequential than tariffs. In China, many American commercial websites, such as Google, Facebook, and Twitter, are completely blocked. According to the 2016 National Trade Estimate Report by the Office of the U.S. Trade Representative, China’s outright blocking of websites appeared to have worsened in 2015, with eight of the top 25 most-visited websites blocked. The report designated China’s Great Firewall a trade barrier to American businesses.

Those who play by the rules will be partners of the United States, Trump said. But for rule-breakers, “the United States will no longer turn a blind eye to violations, cheating, or economic aggression.”

In his speech, Trump cited a litany of sins committed by U.S. trade partners, including intellectual theft, forcing businesses to surrender their technology to the state, cyberattacks, and corporate espionage. The United States would “no longer tolerate the audacious theft of intellectual property,” he said, without naming China.

China is the top aggressor in stealing technology and trade secrets of American companies. In 2015, the Federal Bureau of Investigation (FBI) reported a 53 percent rise in economic espionage cases aimed at U.S. companies. An FBI survey of 165 U.S. companies found that China was the perpetrator in 95 percent of economic-espionage cases.

Stealing is slow and laborious, and success is not guaranteed. How can China make stealing legal? Make new laws. The Chinese regime adopted new cybersecurity rules that require Western companies to turn over their source codes. The agency responsible for reviewing the source codes of Western companies is called the China Information Technology Evaluation Center (CNITSEC). According to the American intelligence company Recorded Future, CNITSEC, a subordinate of the Ministry of State Security of China, is linked to APT3, a persistent hacker group that targets U.S. and Hong Kong companies.

For decades, trade with the United States helped lift millions of people out of abject poverty in the developing world. American elites reaped enormous profits. But American workers got the short end of the stick. Their jobs disappeared and their livelihoods were destroyed, and once-bustling towns died. The corporate and political elite who made those “free trade” deals and pushed the globalist agenda knew this. But every time they struck a trade deal, American workers were an afterthought.

A new international order for trade under Trump’s leadership will help address the challenges we face. It will put American interests first. Fair and reciprocal trade will benefit our partners, and U.S. workers will get an equitable share as well. By strengthening the protection of American intellectual property, American businesses will be able to maintain their competitive advantage. For America, American workers, and our partners, it is a win-win-win.