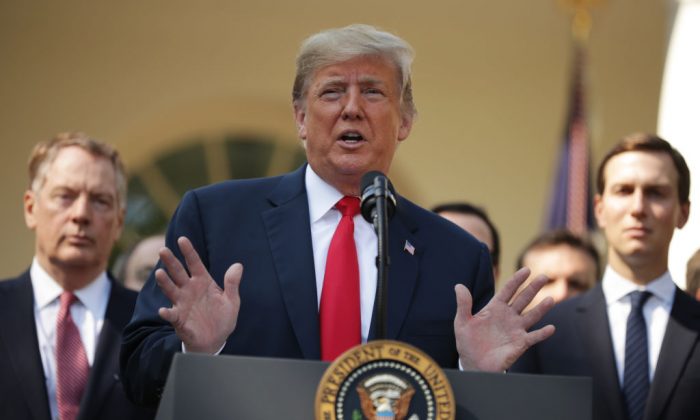 President Donald Trump speaks during a press conference to discuss a revised U.S. trade agreement with Mexico and Canada in the Rose Garden of the White House in Washington, on Oct. 1. (Chip Somodevilla/Getty Images)
Trump Administration

WASHINGTON—The new United States-Mexico-Canada Agreement (USMCA) is the first trade agreement in history to directly address the issue of currency manipulation, which could now serve as a precedent for future U.S. free trade agreements.

Governments manipulate their own domestic currency in order to gain a trade advantage. The United States has long fought to deter this practice, claiming that it has led to the loss or displacement of millions of American jobs.

By keeping their currencies undervalued, governments can make their exports cheap and imports expensive, thus strengthening their competitive positions in international trade and building trade surpluses.

USMCA includes the first-ever chapter on currency manipulation, which states that “each party confirms that it is bound under the articles of agreement of the International Monetary Fund to avoid manipulating exchange rates or the international monetary system in order to prevent effective balance of payments adjustment or to gain an unfair competitive advantage.”

The trilateral partners already have floating exchange rate regimes and currently, meet the transparency and reporting requirements of this rule. Therefore, the impact of the provision on the trade policies of the three countries is limited.

However, the deal covers macroeconomic and exchange rate policies for the first time, setting a precedent for future deals.

“By setting a precedent, the Trump administration is likely to insist on similar commitments in future trade negotiations,” Stephanie Segal, deputy director and senior fellow at Center for Strategic and International Studies wrote in a report.

The revised U.S.-Korea Free Trade Agreement which was signed Sept. 24 does not include enforceable provisions on currency. However, both parties agreed to do a side deal aimed at tackling this problem.

It’s unclear at this point what the currency provisions would look like, but it is an important step as the United States placed South Korea on its monitoring list for currency manipulation in April this year.

“You’re really talking about a pledge to not manipulate your currency and transparency,” Troy Stangarone, senior director at Korea Economic Institute of America said in an interview. “Ultimately these are things that are important for all countries.”

Currency manipulation became a key issue in international trade between 2003 and 2013. Nearly 20 countries were heavily influencing their local currencies as part of their trade strategies. According to a report by Peterson Institute for International Economics, manipulation was a more common practice for manufacturing countries—mainly in Asia—oil exporters, and financial centers.

More than $250 billion of trade balances annually shifted from deficit to surplus countries due to the currency misalignments.

“The United States lost at least one million jobs as a result, especially during the Great Recession when unemployment was already high. European countries were major losers as well,” the Peterson Institute report said.

Although the currency manipulation has slowed down in recent years, the practice continues to occur. In recent years the largest manipulators have been Singapore and Switzerland.

The Treasury Department is expected to issue soon its semiannual report to Congress that analyzes the exchange rate and economic policies of its trading partners.

“We do not expect the United States to name any country a currency manipulator,” stated Goldman Sachs economists in a report.

“However, we expect that China, Japan, Germany, Korea, India, and Switzerland will remain on the monitoring list, and we think Taiwan could be added back.”

Although real policy consequences of being named a “manipulator” are minor relative to the ongoing tariff actions, labeling China would cause another escalation of the trade war, according to Goldman Sachs.

However, it continues to manipulate on occasion, and this could be an important issue in the trade negotiations between the United States and China.

The Chinese yuan has fallen 6.5 percent this year against the U.S. dollar, as a result of the China-U.S. trade war and a slowdown in Chinese economic growth.

Mnuchin refused to answer questions about whether the Treasury Department would formally cite China as a currency manipulator.

“What we go through on the report is a technical analysis. I’m not going to say what the result is but it is very thorough analytics,” he said.