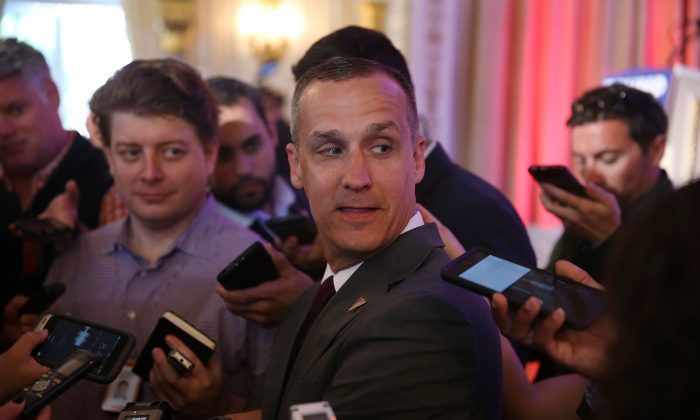 Corey Lewandowski was charged on March 29 for assault and battery of now-former Breitbart reporter Michelle Fields in Jupiter, Florida on March 8.

Fields alleges that Lewandowski got physical with her after asking Trump a tough question. Lewandowski turned himself into the police at 8 a.m. after the announcement of the charges.

The court date is set for May 4.

He had maintained his innocence shortly after the incident, calling Fields “delusional.”

@MichelleFields you are totally delusional. I never touched you. As a matter of fact, I have never even met you.

Trump’s campaign echoed his claims of innocence following news of the charges:

“Mr. Lewandowski is absolutely innocent of this charge,” the Trump campaign said in a statement. “He will enter a plea of not guilty and looks forward to his day in court. He is completely confident that he will be exonerated.”

Jupiter Police Department have released an official video that shows Lewandowski grabbing Fields from behind, and pulling her away from Trump.

Fields was a reporter for the website Breitbart which has generally reported favorably on Trump. Following the incident, she resigned from her position, saying that the website has not stood by her.

“I do not believe Breitbart News has adequately stood by me during the events of the past week and because of that I believe it is now best for us to part ways,” Fields said in a statement obtained by BuzzFeed.

That looks horrible. You’re going after a Breitbart reporter, the people who are nicest to you?
— Ben Terris, Washington Post
Related Coverage

Donald Trump: Remarks About Women Came When He Wasn’t Expecting to Run for Office

The incident was also captured on tape, which Politico released quoting her saying after the incident to fellow reporter Ben Terris of the Washington Post:

“That looks horrible. You’re going after a Breitbart reporter, the people who are nicest to you?”

She posted a picture of her bruised arm following the incident: