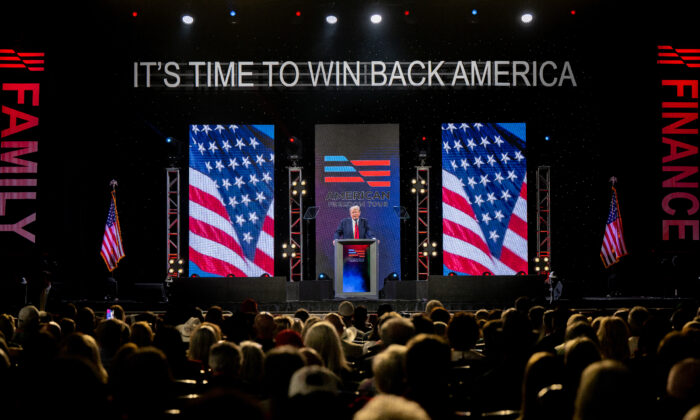 All American political factions except the unambiguous supporters of former President Donald Trump are now whistling past the graveyard. But the Democratic and Republican versions of the “Trump is a Monster” school of current U.S. political science are staking out the lines of where they choose to make their last stands.

The May 22 main headline of The New York Times was “Trump’s ’20 Election Lies Take Root in Statehouses,” and Peggy Noonan a few days before in The Wall Street Journal advised one more time that Trump’s base is eroding and that he’s now trying to guess where it’s going without him, so he can catch up. She effectively imputes to Trump the same leadership deficiencies as the mid-19th century French opposition figure Alexandre Auguste Ledru-Rollin, who famously is alleged to have said, “There go the people and I must follow them, for I am their leader.”

Both of these approaches are bunk. The Democrats have to cling to the threadbare myth that 2020 was a clean election, despite the 4.8 million harvested ballots and the unconstitutional changes to voting and vote-counting rules in most of the swing states, the war on verification, and the abdication of the judiciary from judging any of the issues that raised the constitutionality of the ostensibly COVID-inspired changes. If fewer than 50,000 votes had flipped in Pennsylvania and any two of Arizona, Georgia, and Wisconsin, Trump would have won in the Electoral College.

The Democrats must maintain the fraud of an unquestionably clean election to retain legitimacy, and to maintain whatever tatters are left of the fatuous argument that Trump attempted to incite the violent overthrow of the government on Jan. 6, 2021.

For the Republican Never Trumpers—and Noonan is one of their more civilized and otherwise amiable spokespeople—not only did “1/6” (so-called as if it had the remotest similarity to 9/11) amount to some sort of call for illegal upheaval, but Trump is a paper tiger and the Republicans are reverting to a purposeful but eminently civilized Reaganite Party.

Unfortunately, the Bushes, John McCain, and Mitt Romney emasculated the Reagan Party: Ross Perot gouged away the Reagan-populist faction that Reagan added to the old Eisenhower–Nixon center-right coalition, and McCain and Romney retreated to the country clubs, and both choked in the clutch in their election campaigns with Barack Obama. (It must in fairness be said that after the debacle of George W. Bush, from Wall Street to Baghdad, the Republican chances in 2008 were sharply reduced. “This sucker could go down,” then-President Bush’s reference to the U.S. economy, didn’t make it as an update of Franklin D. Roosevelt’s reassurance in 1933 that “the only thing we have to fear is fear itself.”)

It was Trump alone who raised the Republican Party from a permanent minority of intimidated political losers that had run it since Reagan’s time and encroached heavily on traditional Democratic voting blocs. Whatever anyone thinks of Trump, he’s the first president since FDR for whom people in any part of the country will stand outside in falling snow for hours to see and hear him. No one who saw the immense ovation given Trump at the Kentucky Derby earlier in May by 150,000 people across all socio-economic groups could doubt the force of his political popularity.

In primary election races so far, all but seven of the 100 candidates he endorsed have won. (Now that Gov. Brian Kemp won in Georgia without Trump’s backing, the former president should respond in a sportsmanlike manner, which isn’t always his strong suit.)

Trump has his well-publicized shortcomings, and there’s no denying the huge numbers of his perfervid detractors. But he was a very successful president, despite unprecedented illegal harassment (as the daily revelations of the depths of Democratic skullduggery in the Trump–Russia collusion fraud show). He leads all polls and is well ahead of potential Republican presidential rivals.

No Democrat can seriously attempt to justify the performance of the administration or Congress. Even so-called progressives (whose definition of progress is to plunge America into a state of retardation and depression by almost every criterion) are upset that the administration is slacking and not going full speed ahead in increased spending and acceleration of the Green New Deal. They’re happy to buy oil from Venezuela, a corrupt, semi-communist dictatorship that enjoys some romantic support from the Sandersite wing of the party, and they’re happy with rising gasoline prices on the theory that it will push Americans more quickly into electric cars and the public transit systems (many of them now unsafe).

The policy area where they seem most satisfied with the administration is immigration, where all will concede, except the surrealistically implausible Homeland Security Secretary Alejandro Mayorkas, that the administration is getting on admirably in allowing anyone who wishes to enter the country to do so. The presumed underlying ambitions for this policy of national suicide are to admit enough permanently grateful Democratic voters to produce an almost one-party system, and to reduce whites to a minority of Americans, to facilitate the seizure and redistribution of their wealth to others.

This goal is only specifically espoused by the peppiest of the new members of the 2020 Democratic coalition, but it’s hard to find any other plausible motive to impute to the supporters of the current administration policy of a completely open southern border. The latest polls indicating that only 26 percent of Hispanic Americans now approve of the Biden administration indicate that this catastrophic policy is backfiring.

We regularly see the collapse in defeat of key supporting individuals and organizations in the anti-Trump movement: the unmasking of Black Lives Matter as an allegedly massive tax cheat operation that effortlessly swindled witless U.S. big businessmen out of hundreds of millions of shareholders’ dollars, the collapse in the ratings of CNN and MSNBC, the resigning of CNN’s Jeff Zucker, the folding of Chris Wallace’s CNN streaming service after it attracted only a few thousand viewers in all of America and after only three weeks, the unmasking of Twitter and specifically of the president’s Twitter account as largely frauds, and the apparent loss of control of Twitter to former Democratic voter Elon Musk. Hillary Clinton has been finally revealed as approving the mighty Trump–Russia smear job and the suborning and politicization of senior ranks of the FBI and CIA: the dirtiest political trick in U.S. history.

And while the Democrats are now just flying with their eyes closed, the Never Trumpers are trying to pretend they have no responsibility for the installation of this appalling gang of bunglers and tinkerers, and are trying to pretend not only that they’re innocent but that it will all work out because we will get Trumpism without Trump after Trump.

It’s unlikely that any serious Republican will run against Trump for the nomination, and it’s almost inconceivable that the Democrats could be reelected. The diehard Democrats still dreaming that “1/6” can be sold as an attempted coup d’etat are retreating into a corner with The New York Times claiming the sleaze-stained 2020 presidential election was immaculate. At the least, it’s unclear who really won, as in the elections of 1960 (Kennedy–Nixon) and 2000 (Bush–Gore).

Those who are mortified today by their own responsibility for Trump’s departure and his replacement by this appalling burlesque of an administration, and who have no comprehension of the Trump voter at all, are being led like choristers by Noonan and other Republican Trump-haters in a new rendition every week of the fantasy that Trump’s base is shrinking and moving to GOP candidates other than Trump. Dream on.