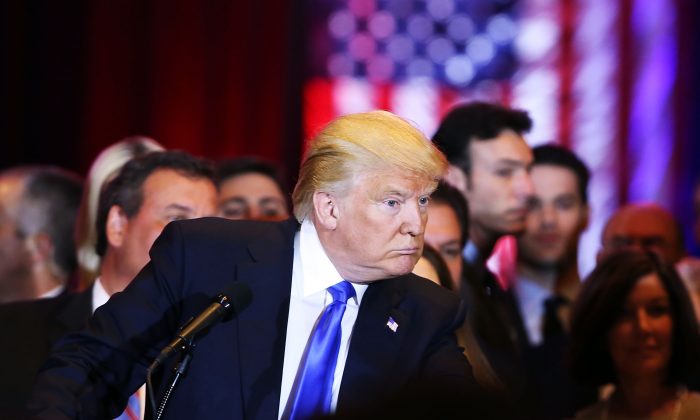 “Why did Clinton supporter @AlisonForKY declare Crooked Hillary winner in KY when AP hasn’t even called the race?” said the presumptive Republican nominee.

Why did Clinton supporter @AlisonForKY declare Crooked Hillary winner in KY when AP hasn’t even called the race?

The Kentucky Democratic primary on May 17 was a nail biter, with the unofficial results from the Secretary’s website showing Clinton with a slight advantage of 1,924 votes with all precincts reporting.

The Associated Press reported that “Tuesday’s primary in Kentucky was too close to call with Clinton leading Sanders by less than one-half of 1 percent.”

Grimes, however, called the race in favor of Clinton.

“The results tonight that you see from the secretary of state’s office all remain unofficial,” Grimes said. “I do believe though, based on what we’re seeing coming in, that Kentucky will remain in the ‘win’ column for Clinton.”

“We just won Kentucky! Thanks to everyone who turned out. We’re always stronger united,” she declared on Twitter.

We just won Kentucky! Thanks to everyone who turned out. We’re always stronger united. https://t.co/8qYPHIje8I pic.twitter.com/elNUP4nFoO

Grimes is a longtime friend of Hillary Clinton and has endorsed the former Secretary of State.

In 2014, Clinton helped Grimes campaign against Republican Mitch McConnell saying that she’s a “vigorous, intelligent, determined young woman,” and that Kentucky voters have a “stark choice” to make.

The Kentucky and Oregon primaries came the same day as tempers flared in the Democratic party, with a rift forming between runner-up candidate Bernie Sanders and the rest of the party over the handling of the Nevada state convention on May 14.

DNC Chairwoman Debbie Wasserman Schultz and Minority Leader Harry Reid called for Sanders to condemn the violence in Nevada. Sanders condemned the violence, but was also critical of the Democratic party.

Many in the party fear that the rift will result in a contentious—possibly violent—National Democratic Convention this summer in Philadelphia.