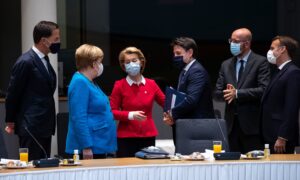 House Speaker Nancy Pelosi (D-Calif.) weighed in on whether President Donald Trump would leave the White House if he loses to presumptive Democratic nominee Joe Biden in November.

Trump, in an interview with Fox News aired Sunday, was asked about whether he would accept the results of the 2020 election. He declined to answer the question directly.

When she was asked in a televised interview on Monday about Trump’s comments, Pelosi responded, “The fact is whether he knows it yet or not, he will be leaving.”

“Just because he might not want to move out of the White House doesn’t mean we won’t have an inauguration ceremony to inaugurate a duly elected president of the United States. And you know, I’m second in line to the presidency and just last week I had my regular continuation of government briefing. This might interest you because I say to them, ‘This is never going to happen, God willing it never will.’ But there is a process,” Pelosi said.

The House speaker added that “it has nothing to do with a certain occupant of the White House doesn’t feel like moving and has to be fumigated out of there because the presidency is the presidency … I wouldn’t spend so much time on it, that’s a victory for him because then we’re not talking about your first, more important subject, which is, what are we going to do to stop this vicious virus that is making an assault on our health, again, our lives, our livelihood, and life of our democracy.”

Trump for months has attacked the prospect of mail-in voting, saying that the results would be tainted by fraud. He wrote on June 22: “RIGGED 2020 ELECTION: MILLIONS OF MAIL-IN BALLOTS WILL BE PRINTED BY FOREIGN COUNTRIES, AND OTHERS. IT WILL BE THE SCANDAL OF OUR TIMES!”

“The thing we have going for us, especially when there’s intense division in the country, is that we have peaceful transfers of power and a way of resolving it is to have an election,” Barr told Fox News at the time, adding that “when state governments start adopting these practices like mail-in ballots, that open the floodgates of potential fraud, then people’s confidence in the outcome of the election is going to be undermined.”