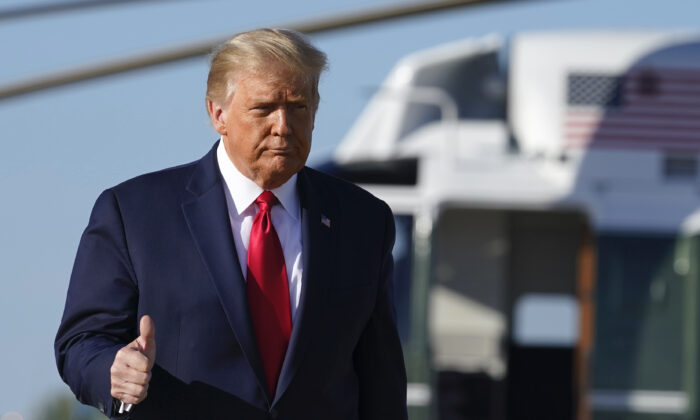 President Donald Trump gives a thumbs up as he walks to board Air Force One, at Andrews Air Force Base, Md., on Oct. 14, 2020. (Alex Brandon/AP Photo)
Donald Trump

President Donald Trump said that if he is reelected, his administration will attempt to reduce U.S. dependence on Chinese manufacturing and bring those jobs back to the United States.

“We will make America into the manufacturing superpower of the world, ending reliance on China once and for all,” Trump said Wednesday during an event with the Economic Club of New York and other chapters.

In his remarks, the president said he would reward companies that move their jobs to the United States and punish firms that oppose the measure.

“We will keep taxes low for companies that move jobs to America, and we’ll impose steep tariffs on any company that leaves,” he said. “They want to leave? They want to make our product and then sell it back after firing everybody? Not going to happen. They will be tariffed,” Trump added.

The U.S. manufacturing sector, according to the National Association of Manufacturers (NAM), added about 450,000 workers during the first three years of Trump’s presidency before the pandemic. When businesses were forced to temporarily shut down, about 700,000 jobs during the March-through-September period were lost, the group said.

NAM said last week the number of current manufacturing job openings reached 460,000, which is the highest since July of last year, adding that it will be looking to fill 4.6 million jobs over the next eight years. Before the pandemic in January 2019, the United States had 12.8 million manufacturing jobs after 264,000 jobs were added in 2018, which was the highest number since 1988, data shows.

Trump’s comments came about three weeks before the November election. Trump spoke from the White House Rose Garden and will now head to Iowa and has rallies scheduled in North Carolina, Florida, and Georgia this week.

His speech also included some critical comments toward the Obama administration and former Vice President Joe Biden, his Democratic presidential rival, accusing them of selling out “American workers like never before.”

“I implemented massive tax cuts and regulation cuts to keep jobs, opportunity and wealth in America,” he said. “I’ve taken the toughest-ever action against China’s chronic trade abuses that we all know so well. I immediately canceled the last administration’s job-killing Trans-Pacific Partnership, and I renegotiated the South Korea deal, which was a disaster,” Trump said.

His recent comments came as the U.S. economy continues to reel due to stay-at-home mandates and business shutdowns to curb the spread of the CCP (Chinese Communist Party) virus. During the pandemic, Trump has repeatedly tried to shift the focus away from the current state of the economy to the pre-pandemic one.

In his speech, Trump also issued a warning that if he loses the election, then “China will own the United States.”

“China unleashed the virus onto the world, and only a Trump administration will hold them accountable,” he added.