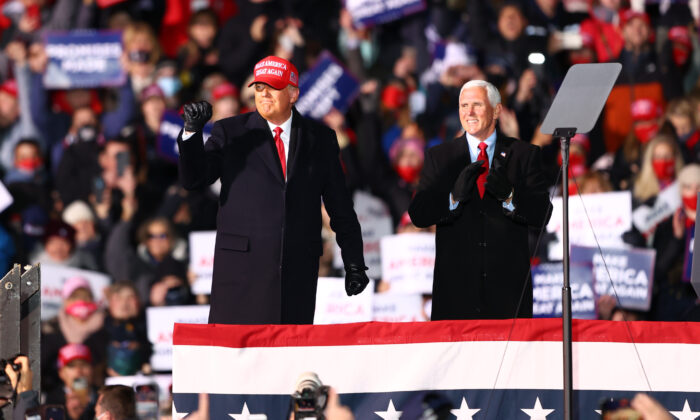 “States want to correct their votes, which they now know were based on irregularities and fraud, plus corrupt process never received legislative approval,” Trump wrote on Twitter. “All Mike Pence has to do is send them back to the States, AND WE WIN. Do it Mike, this is a time for extreme courage!”

Hours before that, Trump said that if Pence “comes through,” Trump will win the presidency, adding that he believes Pence “can send it back” to the legislatures.

Some legal experts have said that they do not believe Pence—or any other vice president—has much power during the Joint Session of Congress, terming his role as a mostly ceremonial one. Pence, in his capacity as vice president, serves as president of the Senate.

A report from the New York Times, which used anonymous sources, claimed that Pence told Trump that he has little power.

Further, the president believes that Pence has options under the Constitution and can “decertify the results or send them back to the states” that are contested for another certification.

“He can also decertify the illegal and corrupt results and send them to the House of Representatives for the one vote for one state tabulation,” he noted.

Dozens of GOP House representatives and senators have pledged to object to the electoral votes in key states during the Joint Session. Following the objection, a debate will be held for several hours on each state before a simple majority vote is held.

Pence, for his part, told a crowd of rally-goers in Georgia that he shares the concerns regarding voter fraud in the state and others.

“I share the concerns of millions of Americans about voting irregularities,” Pence said. “And I promise you, come this Wednesday, we’ll have our day in Congress. We’ll hear the objections. We’ll hear the evidence.”

The Joint Session of Congress will start at 1 p.m. EST on Wednesday.

Trump is also expected to address a crowd of supporters during rallies held in Washington.