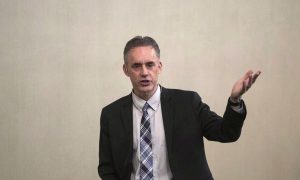 The Perils of Words When Used for Character Assassination
0 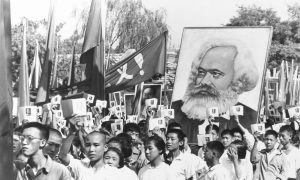 The 'Shadow Agenda' Behind Modern Politics
0 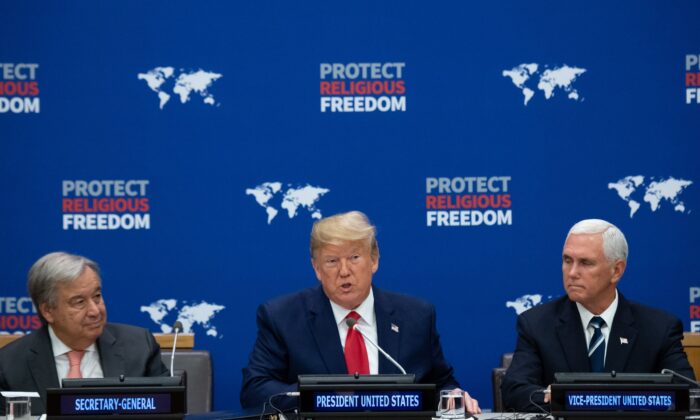 Trump Urges Nations at the UN to Stop Religious Persecution

NEW YORK—President Donald Trump called on countries to end religious persecution around the world, asking governments to release prisoners of conscience and repeal laws that restrict religion and belief.

World leaders have gathered in New York this week for the 74th session of the United Nations General Assembly (UNGA). Trump started his meetings by hosting the “Global Call to Protect Religious Freedom” event on Sept. 23 at U.N. headquarters.

In his keynote remarks, the president said that he was the first leader to initiate discussion of religious freedom and persecution at the UNGA high-level meetings. He added that the meeting was long overdue.

“I was shocked when I was given that statistic that I would be the first. That’s very sad in many ways,” he said. “Today, with one clear voice, the United States of America calls upon the nations of the world to end religious persecution.”

“Our Founders understood that no right is more fundamental to a peaceful, prosperous, and virtuous society than the right to follow one’s religious convictions,” he said.

Trump noted that the religious freedom enjoyed by Americans is rare in the world, adding that 80 percent of the world’s population live in countries where religious liberty is threatened or banned.

“When I heard that number I said, ‘Please go back and check it because it can’t possibly be correct.’ And sadly, it was 80 percent,” he said.

He slammed world leaders saying that too often they “preach diversity while silencing, shunning, or censoring the faithful.”

He also said that the United States stands with believers in every country and that protecting religious freedom is one of his top priorities.

During his remarks, the president touted his efforts to free U.S. evangelical pastor Andrew Brunson, who was imprisoned in Turkey for two years.

“They’d been trying to get Andrew out for a long time—previous administration. I don’t think they tried too hard, unfortunately,” he said.

In his speech, Trump condemned both state-sponsored persecution and terrorist attacks against religious targets in the United States and around the world.

“We’re also urging every nation to increase the prosecution and punishment of crimes against religious communities,” Trump said.

He announced that the United States would form a coalition of U.S. businesses for the protection of religious freedom.

“This is the first time this has been done. This initiative will encourage the private sector to protect people of all faiths in the workplace,” he said.

In addition, the Trump administration will allocate an additional $25 million fund “to protect religious freedom and religious sites and relics.”

Speaking at the event, Vice President Mike Pence singled out countries where the persecution against people of faith is the most severe, such as Iran, Iraq, China, Nicaragua, and Venezuela.

“The regime in Iran brutally persecutes Christians, Sunnis, Baha’i, and Jews,” he said, adding that Iran-backed militias slaughtered Christians and Yazidis in Iraq.

“The Communist Party in China has arrested Christian pastors, banned the sale of Bibles, demolished churches, and imprisoned more than a million Uyghurs in the Muslim population,” he said.

Religious groups and minorities in China—including Uyghurs, Tibetan Buddhists, Christians, and Falun Gong practitioners—continue to suffer from systematic arrest, unlawful imprisonment, torture, and brainwashing. The government is using various methods of persecution, from concentration camps to forced organ harvesting from prisoners of conscience, according to researchers.

Falun Dafa Information Center spokesperson Peter Erping Zhang, who was among the guests attending Trump’s religious freedom event, said the U.N. and the international community should take a “tough stance and speak up against modern-day atrocities in China,” especially in light of the forced organ harvesting from Falun Gong practitioners.

“It is a good start that such a high-level conference is held at the U.N. where religious freedoms are part of the world discussion. We hope that the worst abuser—the Chinese communist regime—would be publicly shamed for its state-sponsored terrorism against its own people,” he said, calling on the international community to take action.

The Trump administration has been pushing for greater tolerance of different faiths by governments around the world.

To address religious persecution, the U.S. State Department initiated the first Ministerial to Advance Religious Freedom in Washington last year. More than 1,000 civil society and religious leaders, and more than 100 foreign delegations were invited to the second Ministerial in July, in what has been called the largest religious freedom event in the world.

In July, Trump also met with 27 survivors of religious persecution from 17 countries in the Oval Office at the White House. A practitioner of Falun Gong who was tortured in China for her faith was among the survivors who met with Trump.

“The president’s speech is an important and historic moment precisely because religious freedom is too often ignored or downplayed at the U.N.,” Kelsey Zorzi, Alliance Defending Freedom international director of global religious freedom and president of the United Nations’ NGO Committee on Freedom of Religion or Belief, said in a statement.

‘Erase Its Own Citizens’

In addition to the “Global Call” for which Trump gave the keynote speech, other events showed how religious freedom has topped his administration’s agenda at the UNGA.

And China is the main target.

Secretary of State Mike Pompeo on Sept. 22 held a meeting with the foreign ministers of five Central Asian countries. After his meeting, Pompeo called on other countries to resist China’s demands to repatriate Uyghurs to the northwestern region of Xinjiang.

“I want to make clear that China’s repressive campaign in Xinjiang is not about terrorism. It’s about China’s attempt to erase its own citizens,” he told reporters.

Deputy Secretary of State John Sullivan will host another event on Sept. 24 at the U.N. headquarters on the “human rights crisis in Xinjiang.”