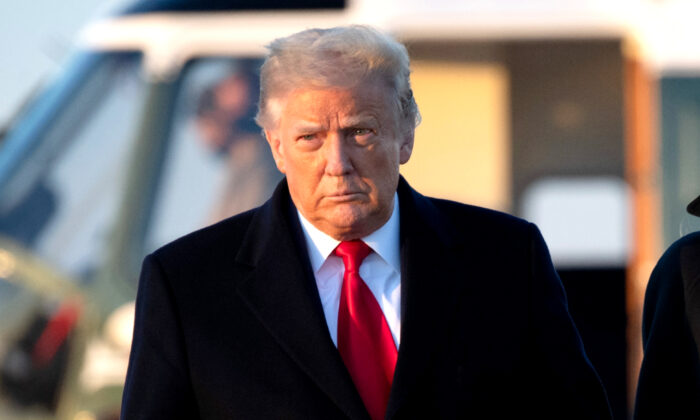 President Donald Trump walks to board Air Force One prior to departure from Joint Base Andrews, Md., on Dec. 23, 2020. (Saul Loeb/AFP via Getty Images)
Election Integrity

It purports to show that there were 289,000 “excess votes” across six battleground states, and claims that differences in absentee votes between counties with alleged fraud and adjacent counties is “suspicious.”

Lott’s study seeks to provide measurements of vote fraud in the 2020 presidential election, including by comparing precincts in Georgia’s Fulton County that are adjacent to similar precincts in neighboring counties where there were no allegations of fraud.

“In layman’s terms, in precincts with alleged fraud, Trump’s proportion of absentee votes was depressed—even when such precincts had similar in-person Trump vote shares to their surrounding” counties, Lott wrote in the study. He says it’s “suspicious” that the shift happened only in absentee ballots, and only when a county line was crossed.

Fulton County was ground zero for election fraud allegations during the recent election. Election workers counted ballots for over an hour with no monitoring by observers, media, or state officials, according to surveillance footage and Secretary of State Brad Raffensperger’s office. A state senator said in a recent report that the events at Fulton County’s State Farm Arena seemed to include “coordinated illegal activities.”

Jessica Corbitt, a Fulton County spokeswoman, told The Epoch Times earlier this month that the county has “invested every possible resource into ensuring a free, fair, and transparent election in compliance with all applicable laws.”

“To date we are aware of no credible reports of voter fraud or wrongdoing in Fulton County. Any credible report of such activity will be investigated and addressed as provided by Georgia law,” she said.

According to Lott, “the best estimate shows an unusual 7.81 [percent] drop in Trump’s percentage of the absentee ballots for Fulton County alone of 11,350 votes, or over 80 [percent] of Biden’s vote lead in Georgia.”

Lott also wrote in an abstract to his study that he applied the same methodology to Allegheny County in Pennsylvania, claiming that “the estimated number of fraudulent votes from those two sources is about 55,270 votes.”

“The estimates here indicate that there were 70,000 to 79,000 ‘excess’ votes in Georgia and Pennsylvania,” Lott wrote in the study. “Adding Arizona, Michigan, Nevada, and Wisconsin, the total increases to up to 289,000 excess votes.”

He argued that precinct level estimates for Georgia and Pennsylvania “indicate that vote fraud may account for Biden’s win in both states,” claiming also that “the voter turnout rate data also indicates that there are significant excess votes in Arizona, Michigan, Nevada, and Wisconsin as well.”

Peter Navarro, who serves as an adviser to Trump, also shared Lott’s study in a recent tweet, in which he called for a postponement of Georgia’s Senate runoff election in light of the study’s findings.

Navarro recently released his own report on the integrity of the 2020 election, claiming that the allegations of irregularities are serious enough to warrant an urgent probe and substantial enough to potentially overturn the results.

The findings of Navarro’s report (pdf) “The Immaculate Deception,” released on Dec. 17, support the claim that the election “may well have been stolen” from Trump. Navarro, who is director of the White House Office for Trade and Manufacturing Policy, produced the report in his capacity as a private citizen.

Rather than any single “silver bullet” of election irregularity responsible for an unfavorable outcome for Trump, Navarro argued that “this was theft by a thousand cuts across six dimensions and six battleground states.”

On a call with reporters explaining his findings, Navarro declined to specify a proposed remedy in light of his findings, aside from a thorough investigation. He did say, however, that “the last thing this country needs is an Inauguration Day where we have what is perceived to be an illegal and illegitimate president of the United States.”

In the report, Navarro examines six types of irregularities in the battleground states of Arizona, Georgia, Michigan, Nevada, Pennsylvania, and Wisconsin—states in which certified results show Biden holding a lead and where the vote continues to be hotly contested.

Navarro said that the pattern of irregularities across the six states suggests “a coordinated strategy to, if not steal the election outright, strategically game the election process in such a way as to ‘stuff the ballot box’ and unfairly tilt the playing field in favor of the Biden–Harris ticket.”

State election officials, the Department of Justice, and others have pushed back against claims of widespread voter fraud in the 2020 election, while the Cybersecurity and Infrastructure Security Agency has called the Nov. 3 election “the most secure in American history.”