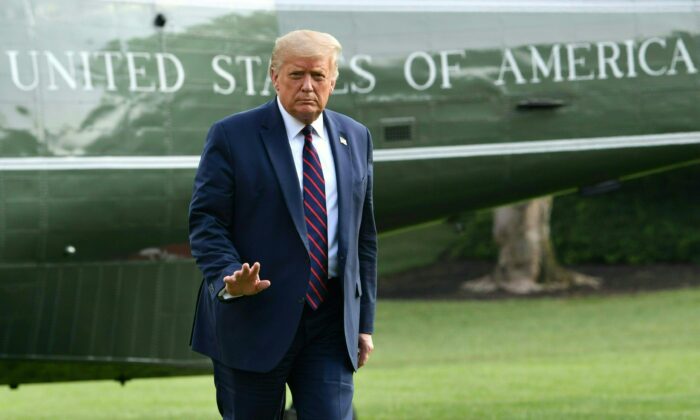 WASHINGTON—In response to supply disruptions caused by the pandemic, President Donald Trump will sign an executive order in Ohio Thursday to ensure essential medicines, medical supplies, and equipment are made in the United States.

“If we’ve learned anything from the China virus pandemic, it is simply that we’re dangerously over-dependent on foreign nations,” White House trade adviser Peter Navarro told reporters on Thursday.

He said the president will sign a broad executive order in Ohio that covers not just medicines, but also medical supplies such as masks, gloves, goggles, and medical equipment like ventilators.

The executive order is called “Combating Public Health Emergencies and Strengthening National Security by Ensuring Essential Medicines, Medical Countermeasures, and Critical Inputs are Made in the United States.”

According to Navarro, the executive order has three components, which include the “Buy American” order to ensure that government agencies, including the departments of Veterans Affairs, Health and Human Services, and Defense, buy American products.

The order aims to increase government demand for U.S.-made products to help create a market for manufacturers to invest and to produce in the United States.

The other component of the order is the deregulation, which ensures the Food and Drug Administration (FDA) and the US Environmental Protection Agency (EPA) ease rules for the development of advanced manufacturing facilities in the United States.

This will help create “a more rational and streamlined regulatory process” to address national security threats in a timely fashion, Navarro said.

And the third part, which is critical to keep drug prices down is “to catalyze advanced manufacturing and continuous manufacturing techniques.” The objective is to create economies of scale and scope to help reduce the cost of production in the United States.

Besides essential medicines, medical countermeasures are also a key part of this order, Navarro said, as they are crucial to fight national security threats including chemical, biological, radiological, and nuclear (CBRN), as well as pandemic threats.

The executive order also has “an element to combat the trafficking of counterfeit medicines coming in,” primarily “from Communist China,” he added.

The administration has been working for months on the executive order. The pandemic has forced the U.S. government to revisit America’s over-reliance on other countries.

China controls 90 percent of the core chemicals used in generic drugs, which are copies of prescription drugs that are allowed for sale after patent protections on the original drugs expire.

China is also the dominant supplier of personal protective equipment, such as masks, respirators, surgical gowns, and gloves, which are currently in high demand.

During the pandemic, countries where production facilities are located, such as India and China,  have imposed export restrictions for critically needed items. That’s disrupted the U.S. pharmaceutical industry’s global supply chain and prompted the White House to take action.

“At a minimum, we need to have enough production to deal with pandemic and CBRN threats,” Navarro said in response to a question by The Epoch Times.

“We’re a long way from that but we can move in Trump time, which is to say as quickly as possible towards closing that gap and today is a big step towards that.”