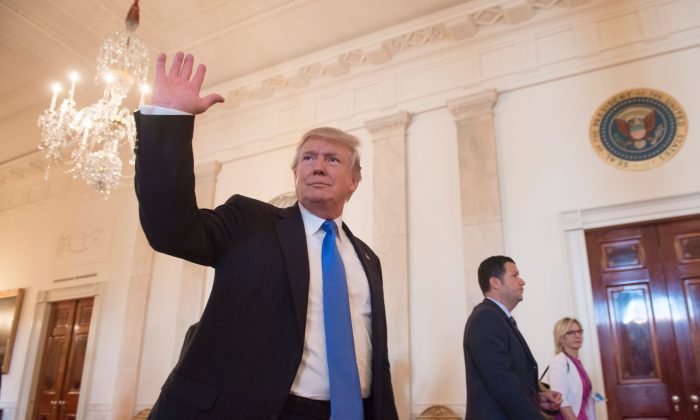 U.S. President Donald Trump walks down the Cross Hall following a Made in America event with U.S. manufacturers in the East Room of the White House in Washington on July 19, 2017. (Saul Loeb/AFP/Getty Images)
Trump Administration

“The philosophy of my administration is simple: If we can build it, grow it, or make it in the United States, we will,” Trump said during his speech at the “Made in America” event hosted by the White House.

The new executive order will eventually raise the domestic content threshold up to “75 percent and above so that domestic goods will have to have 75 percent American” parts to be considered “Made in USA,” Trump said.

Currently, for government procurement purposes, a product is considered U.S.-made if at least 50 percent of its components by value are domestically sourced, according to the Buy American Act.

In addition, the new executive order aims to increase the domestic content threshold for U.S.-made iron and steel to 95 percent from 50 percent, according to Peter Navarro, White House trade adviser.

‘Made in America’ Showcase

Manufacturers from 50 states displayed their products at the third annual “Made in America” showcase hosted by the White House on July 15.

Among the U.S. products displayed were sandals from Florida, hats from Wyoming, Tabasco from Louisiana, cobalt boats from Kansas, and custom-built motorcycles from Indiana. Trump has hosted the showcase every year since he took office in 2017.

During his remarks, Trump praised companies for their commitment to U.S.-made goods. Among them was a company called Litespeed, a manufacturer of a titanium bike from Chattanooga, Tennessee. The company saw a 70 percent growth in business during the last two years as a result of moving certain parts of its operations back to the United States, Trump said.

Trump also touted his policies, saying that the economy added 6 million jobs since his election, including more than 1 million jobs in manufacturing, engineering, and construction.

He also said U.S. manufacturers contributed $250 billion more to the U.S. economy than they contributed before the 2016 election.

“We’re heeding the wisdom of our Founding Fathers by restoring our economic independence and reawakening our industrial might,” he said.

‘They Stole Our Wealth’

“They stole our wealth. They stole so much, and it was allowed to go on so long. But it’s not going on any longer.”

During his campaign for the presidency, Trump made advancing U.S. manufacturing a foundation of his economic policy. As a result of his pro-growth reforms such as tax cuts and deregulation, optimism among manufacturers in the United States hit an all-time record in 2018.

“Despite the immediate challenges and uncertainties businesses face, the manufacturing sector continues to expand, albeit more slowly, and business leaders in the sector continue to be mostly upbeat,” according to a report by the National Association of Manufacturers (NAM).

A recent survey from the NAM found that nearly 80 percent of manufacturers have a positive view about their business outlook and half of manufacturers anticipate more hiring during the next year.

The United States was once the world’s leader in manufacturing. After World War II, the country invested in research and development and was significantly ahead of other countries in employing cutting-edge technologies. However, that picture changed in the 1980s.

For decades, many large U.S. companies moved their manufacturing operations to low-cost countries, primarily China. Such moves brought cost benefits and competitive advantage in the short term. However, the companies failed to recognize the strong relationship between production and innovation, according to experts.

Millions of U.S. manufacturing jobs were lost. In some industries, the United States has fallen behind in its ability to manufacture, innovate, and compete.

Protectionist and trade-distorting policies in China and other Asian nations have also weakened the competitiveness of U.S. manufacturing.

China, for example, uses many unfair tactics, such as forcing companies that want access to the Chinese market to relocate their production, R&D, and data storage to China, as well as hand over their intellectual property, according to a report by the Information Technology and Innovation Foundation, a U.S. think tank.

“We’ve been losing $800 billion a year to China. So, essentially, we rebuilt China,” Trump said. “And I don’t blame China. I blame our past presidents and our past leaders for allowing a situation like that—so ridiculous—to happen.”