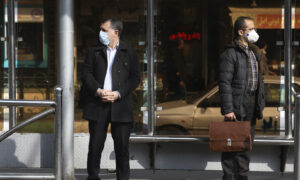 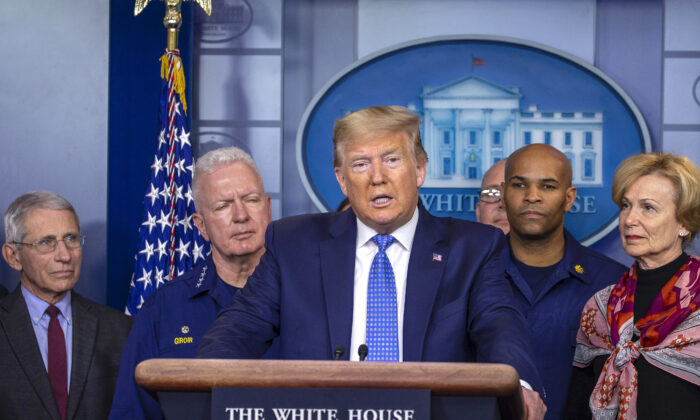 President Donald Trump speaks to the media in the press briefing room at the White House on March 15, 2020. (Tasos Katopodis/Getty Images)
AMERICA

President Donald Trump in a Sunday night comment has called on Americans to “relax” amid reports that stores in various locations are being cleared out of essential items and food.

“You don’t have to buy so much,” Trump told reporters. “Take it easy. Relax.”

Trump said that people should be wary of panic buying but added that supply chains are intact amid the coronavirus outbreak. The president said he met with the heads of top grocery firms such as Target and Costco.

“They have asked me to say, ‘Could you buy a little bit less please,’” Trump said of the retail executives. “I thought I would never hear that from a retailer.”

The individual Governors of States, and local officials, must step up their efforts on drive up testing and testing sights, working in conjunction with @CDCgov and the Federal Government!

He added during the press conference: “Relax. You’re doing great. There’s no need for anybody in the country to hoard essential food supplies, they said to me. Have a nice dinner, relax, because there’s plenty. You don’t have to buy the quantities, because it’s hard to refill.”

In the past week, numerous stores across the United States have sold out toilet paper, hand sanitizer, bottled water, and food such as rice and beans. Some major retailers have implemented rationing measures at various locations.

Trump declared a national emergency over the virus on Friday, freeing up $50 billion in federal resources for states. The announcement pushed markets up by more than 1,000 points after weeks of speculation that the economy might enter recession territory over the pandemic.

Meanwhile, the Federal Reserve cut interest rates on Sunday, which also drew the praise from the president, who himself has been tested for COVID-19, the disease caused by the Wuhan coronavirus, before doctors said it came back negative on Saturday.

We are doing very precise Medical Screenings at our airports. Pardon the interruptions and delays, we are moving as quickly as possible, but it is very important that we be vigilant and careful. We must get it right. Safety first!

“It makes me very happy and I want to congratulate the Federal Reserve,” he said on Sunday. “I think that people in the market should be very thrilled.”

Data from Johns Hopkins University as of Sunday night showed there were 3,200 coronavirus cases and more than 60 deaths in the United States. Washington state, in terms of deaths, is the hardest-hit.

The virus first emerged in mainland China in 2019 before it spread to more than 100 countries. Human rights organizations have accused the Chinese Communist Party of engaging in a cover-up to obscure the true number of deaths and abuses at the hands of the regime.