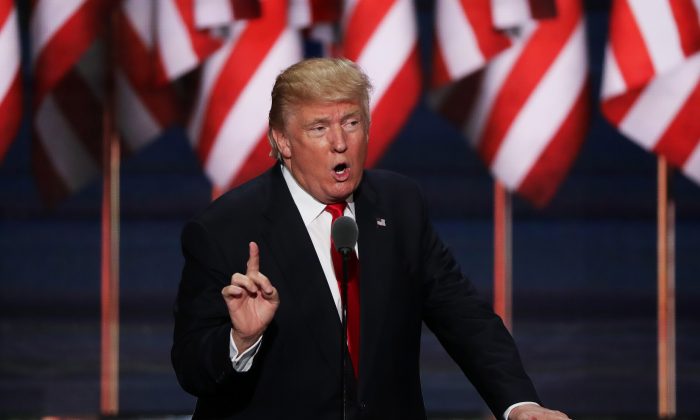 Republican presidential candidate Donald Trump during the evening session on the fourth day of the Republican National Convention on July 21, 2016 at the Quicken Loans Arena in Cleveland, Ohio. (Alex Wong/Getty Images)
2016 race

Trump: ‘There Can Be No Prosperity Without Law and Order’

Donald Trump accepted the Republican nomination with a sweeping seventy-five minute speech that touched on and tied together themes pushed to the forefront of the 2016 Republican National Convention in Cleveland, Ohio.

Painting a picture of a world that has descended into economic decline and lawlessness under President Obama, Trump emphasized a connection between economic and cultural prosperity, and restoration of law and order.

“There can be no prosperity without law and order,” he declared, echoing Richard Nixon’s “law and order” campaign in 1968 and promised that he’s the only one who can fix it.

Trump expanded on “prosperity” and “law and order” throughout his speech, linking it to key reforms in his campaign—immigration and terrorism, trade and jobs, and policing and crime.

Three examples define the vision of prosperity for the Trump administration—more jobs, a reduction in crime, and the destruction of terrorism. In his speech, he linked all three examples to the failed policies of previous administrations, warning that those policies will continue under Hillary Clinton.

“Decades of record immigration have produced lower wages and higher unemployment for our citizens, especially for African-American and Latino workers,” he said. “We are going to have an immigration system that works, but one that works for the American people.”

Trump called for a suspension of “immigration from any nation that has been compromised by terrorism”—a softball reboot of his proposed temporary ban on Muslims—and a wall to be built on the U.S.-Mexico border.

“I only want to admit individuals into our country who will support our values and love our people,” he said.

Tied to the promise of stricter immigration is a warning of increased violence by immigrants.

During his speech he brought up three speakers from Monday who were parents of people killed by illegal immigrants—Mary Ann Mendoza, Sabine Durden, and Jamiel Shaw—saying “nothing has affected me more deeply than the time I have spent with the mothers and fathers who have lost their children to violence spilling across our border.”

The reflection on violence fed into the overall message: lax immigration laws endorsed by Obama—to be continued by a Clinton presidency—takes away jobs and brings violence and terrorism into the country.

Trump also linked the lack of jobs Obama and Clinton through trade deals like the Trans-Pacific Partnership (TPP). Obama signed off on the TPP in February, but the deal still needs to be ratified by the Senate before it can start going into effect.

“TPP will not only destroy our manufacturing, but it will make America subject to the rulings of foreign governments,” Trump said promising not to enter into “massive deals” and to “enforce all trade violations.”

Trump’s positions on immigration and trade are part of a larger reaction to the philosophy and policies of globalism supported by Obama and Clinton, which, according to Trump, threaten the average American.

Trump promised that he alone can fix these problems, and the lost prosperity depicted in his speech can only be found with a restoration and insistence on law and order—a restoration that he will bring about if elected.

“When I take the oath of office next year, I will restore law and order to our country,” he said. “In this race for the White House, I am the Law and Order candidate.”

Trump’s focus on law enforcement relates to recent attacks and violence on police officers in cities all over the country.

“The first task for our new Administration will be to liberate our citizens from the crime and terrorism and lawlessness that threatens their communities,” Trump said.

He then referenced the shooting in Dallas, Texas, on July 8 when five police were shot by Xavier Johnson, and then listed all the places that police have experienced violence since Dallas.

“America was shocked to its core when our police officers in Dallas were so brutally executed,” he said. “Immediately after Dallas, we have seen continued threats and violence against our law enforcement officials. Law officers have been shot or killed in recent days in Georgia, Missouri, Wisconsin, Kansas, Michigan and Tennessee.”

Trump then connected the lawlessness and chaos to terrorist attacks that have been more frequent in the global community, particularly in Paris and Nice in France, San Bernardino, California, Orlando, Florida, and others.

To combat the threat of terrorism, he pointed to gathering intelligence, “abandon the failed policy of nation-building and regime change” of Obama and Clinton, and working with allies to defeat ISIS.

Finally, he explained his law-and-order campaign as a foil against Hillary Clinton’s lawlessness on a personal and professional level, bringing up the FBI’s investigation into her email server, and decrying it as institutional corruption from the top affecting everyday people.

“When innocent people suffer, because our political system lacks the will, or the courage, or the basic decency to enforce our laws—or still worse, has sold out to some corporate lobbyist for cash—I am not able to look the other way,” he said.

The institution has not been effectively enforcing the laws, said Trump, and to fix the institution, law needs to be restored.