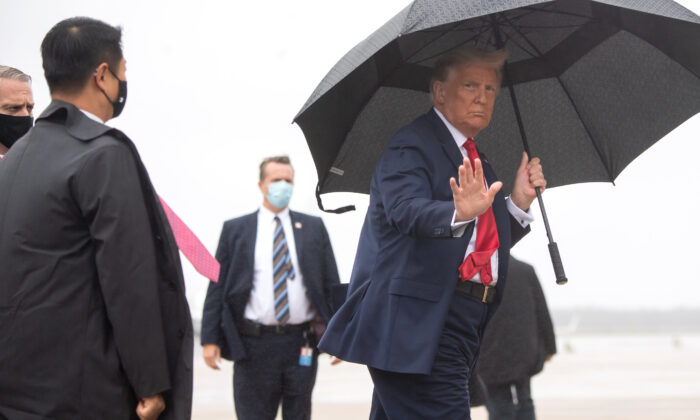 President Donald Trump boards Air Force One prior to departure from Joint Base Andrews in Md., on Oct. 12, 2020. (Saul Loeb/AFP via Getty Images)
AMERICA

President Donald Trump on Monday had tested negative for the CCP virus on two consecutive days, White House Dr. Sean P. Conley announced, as the president flew to Florida to hold a campaign rally for the first time since contracting the virus nearly two weeks ago.

“It is important to note that this test was not used in isolation for the determination of the president’s current negative status,” Conley added. “Repeatedly negative antigen tests, taken in context with additional clinical and laboratory data, including viral load,” and other findings, “all indicate a lack of detectable viral replication,” the doctor said.

The findings revealed that Trump “is not infectious to others,” the memo read.

Earlier on Monday, McEnany, who also tested positive for the CCP (Chinese Communist Party) virus, confirmed Trump will attend the rally in Florida, set for 7 p.m. in Orlando.

“The campaign has always handed out masks, encouraged people to wear them, provided hand sanitizer,” she said in an interview with Fox News on Monday. “Ultimately, you have a right in this country to show up and express your political viewpoint. That’s why we have peaceful protests. And you can’t have one standard for the protesters out there on one side but not for those wanting to express their First Amendment rights in support of this president.”

Former Vice President Joe Biden, in a statement, criticized the president’s move to hold a rally.

“President Trump comes to Sanford today bringing nothing but reckless behavior, divisive rhetoric, and fear-mongering,” Biden said before bringing up allegations from Senate Democrats that Trump’s nominee for the Supreme Court, Judge Amy Coney Barrett, is going to strike down provisions in the Affordable Care Act (ACA).

“Equally dangerous is what he fails to bring: no plan to get this virus that has taken the lives of over 15,000 Floridians under control, no plan to protect Floridians’ health care amid his attacks against the ACA, and certainly no plan to mitigate the economic impact the pandemic is having on families across Central Florida,” Biden alleged.

But on Sunday, Trump told Fox that he is “in very good shape to fight the battles,” while suggesting that he is “immune” from the virus.