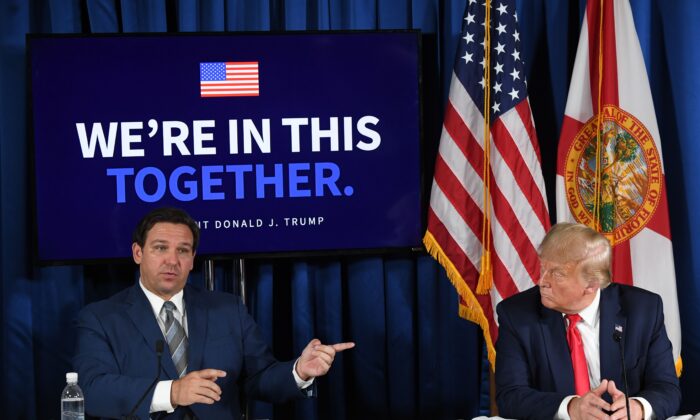 After calling Florida Gov. Ron DeSantis “Ron DeSanctimonious” on Saturday night, former President Donald Trump called on his Miami supporters to vote for the Florida GOP governor during the 2022 midterms.

“With thousands of proud, hard-working American patriots, incredible people–just two days from now, the people of Florida are going to reelect the wonderful, the great, a friend of mine, Marco Rubio to the United States Senate, and you’re going to reelect Ron DeSantis as your governor of the state,” he said at an event while stumping for Sen. Marco Rubio (R-Fla.). “And you’re going to elect an incredible slate of true MAGA warriors to Congress.”

Trump drew headlines when he made the quip about DeSantis at a rally for Dr. Mehmet Oz and Doug Mastriano, Republicans who are campaigning for Pennsylvania’s Senate and gubernatorial seats, respectively. DeSantis and his campaign have not responded to Trump’s comment on Saturday.

DeSantis is facing off against former Florida Gov. Charlie Crist, a Democrat, and Rubio, meanwhile, faces Rep. Val Demings (D-Fla.).  Recent polls have shown DeSantis is ahead of Crist and have shown that Rubio leads Demings.

Trump and DeSantis are both widely considered to be the top contenders for the Republican presidential nomination in 2024, although DeSantis has not made any indication on whether he intends to run during the 2024 contest. When asked about running for president, DeSantis has consistently said he’s campaigning to keep his position as Florida’s governor.

His comments Saturday came as he was talking about polling for possible 2024 GOP candidates, which have shown Trump with a significant lead.

“We’re winning big in the Republican Party for the nomination like nobody’s ever seen before. There it is, Trump at 71 percent, Ron DeSanctimonious at 10 percent,” Trump said in Pennsylvania. “Mike Pence at seven, oh, Mike is doing better than I thought. Liz Cheney there’s no way she’s at 4 percent. There’s no way. There’s no way. But we’re at 71 to 10 to 7 to 4.”

As for Trump running for president again, he has not made any official announcements due to campaign finance laws around donations. In Pennsylvania, he again hinted that he would.

“In order to make our country successful and safe and glorious, I will very, very, very probably do it again,” the former commander-in-chief said of another White House run. “Get ready—that’s all I’m telling you. Very soon.”

He hinted at a rally on Thursday night in Iowa—two days after the midterm elections—in which he could make a 2024 announcement.