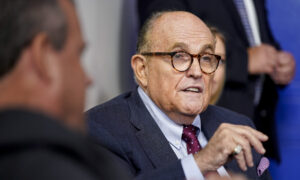 Trump’s lawyer Rudy Giuliani spoke about the allegations of fraud in Pennsylvania, Wisconsin, and Michigan. He said the issue was widespread and that he had enough evidence on just fraud alone to overturn the election.

Senior Legal Advisor for the Trump campaign, Jenna Ellis said the press conference was an “opening statement, so the American people can understand what the networks have been hiding and what they refuse to cover.” She said all of the “fake news headlines are dancing around the merits of this case and are trying to delegitimize” what Trump’s legal team is doing. She said this overview is what you’d expect to see when they go to court and show the evidence.

Sidney Powell, a Trump campaign attorney, spoke more about the allegations surrounding Dominion Voting System. Powell said that there was an algorithm that would flip votes from one candidate to another. Powell said that experts, including a group of Princeton University professors, have discussed multiple end-user vulnerabilities in Dominion.

“People can admittedly go in and change whatever they want. They can set the ratio of votes from one thing to another. They can say a Biden vote counts as 1.25 and a Trump vote counts as 0.75 and those may be the actual numbers that were actually used here,” Powell said.

She said this algorithm was likely used all across the country.

She said in addition to flipping votes, the system also can inject votes for a certain candidate as well. According to her, some of these provisions are written in the manual as being “features.”

Powell also spoke of shocking allegations that some Dominion employees said they were trained to throw away Trump votes.

“We have testimony of different Dominion workers admitting that they were trained how to dispose of Trump votes and add to Biden votes. The gentleman who founded Smartmatic, there’s video of him on the internet that said yes, at least in one occasion, he admits they changed 1 million votes with no problem.”

Powell continued, saying that she had mathematical evidence in a number of states of Trump votes being trashed and Biden votes being injected.

She called these allegations one of the most infuriating, heartbreaking, and most unpatriotic acts for people to have participated in. Powell said American patriots were fed up with corruption from the local level to the highest level of government.

Powell said she will “release the Kraken” and the evidence will come to light in court.