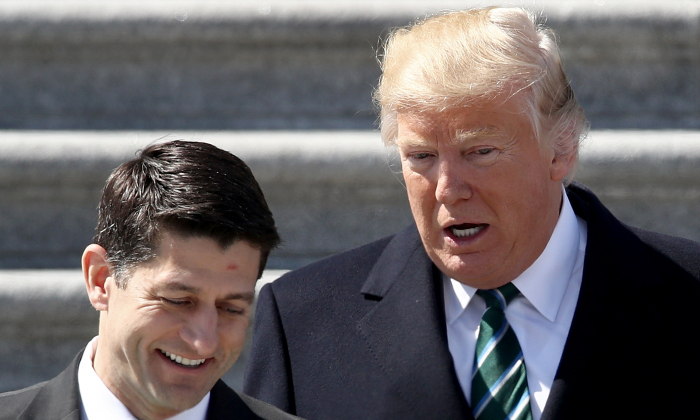 A News Corp-owned publication, the Wall Street Journal, excoriated Trump and declared him the “Republican Party’s biggest loser.” It came after Republicans gained fewer-than-expected seats in the House and Senate after promises of a “red wave.” Meanwhile, Paul Ryan, the former House speaker and vice presidential candidate who sits on the News Corp board, attacked Trump.

Another News Corp outlet, the New York Post, criticized Trump and appeared to blame him for the GOP’s midterm performance. “Don (who couldn’t build a wall) had a great fall,” the NY Post headline read. “Can all the GOP’s men put the party back together again?”

In response, Trump went after Fox News, the NY Post, and Paul Ryan, the former House speaker who became a News Corp board member on his Truth Social platform.

“The New York Post today has a story about the Wall, but my progress on the Wall was slowed down by News Corp Board Member Paul Ryan, who together with the Broken Old Crow Mitch McConnell, weren’t able to get me the funds,” Trump wrote. “I ended up getting them anyway, after two-and-a-half years of lawsuits, through another source, and completed the Wall plus certain additions that were made, which could have been done in three weeks, but no, the Biden Administration stupidly wanted Open Borders.”

As for the midterm results, Trump celebrated by saying: “WE WON! Pelosi is gone, we take Congress and, if we can stop their very obvious CHEATING, will also take the Senate. Big Victory, don’t be stupid. Stand on the rooftops and shout it out loud!”

Some former advisers called on Trump to delay his announcement next week. A day before the midterms, the former president said he would be hosting an event at his Mar-a-Lago resort and making a major announcement, leading many to speculate that it might be a presidential bid.

“I’ll be advising him that he move his announcement until after the Georgia runoff,” former Trump adviser Jason Miller told the Associated Press Thursday. On Tuesday night, Miller joined Trump at Mar-a-Lago while watching the midterm results, he told AP.

Officials in Georgia earlier this week declared that the Senate race between Sen. Raphael Warnock (D-Ga.) and GOP candidate Herschel Walker is heading to a runoff, scheduled for Dec. 6. Neither candidate got more than 50 percent of the vote.

“Georgia needs to be the focus of every Republican in the country right now,” Miller said.

Fox News did not immediately return a request for comment on Friday.