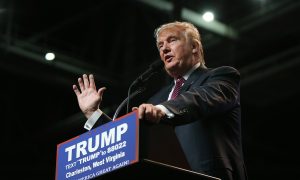 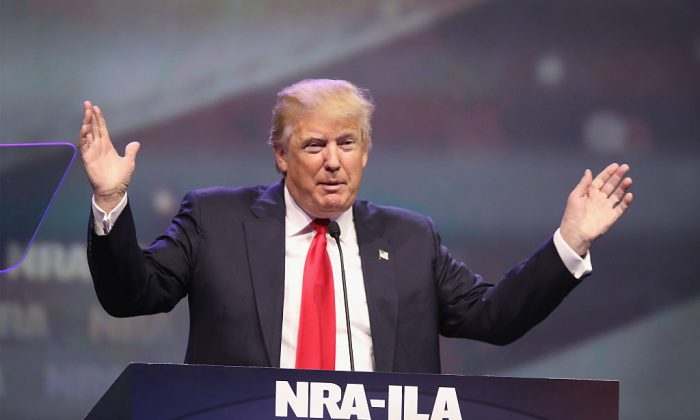 Hours before speaking to the National Rifle Association at their national convention in Louisville, Kentucky, on May 20, Donald Trump fired off a tweet attacking rival Hillary Clinton for her stance on gun control.

The tweet contains a video of Hillary Clinton saying, “Here again, the Supreme Court is wrong on the Second Amendment, and I am going to make that case every chance I get.”

This tweet proved to foreshadow his speech, which focused on gun control, particularly on the policies of Clinton and President Obama.

“Hillary wants to disarm vulnerable citizens in high crime neighborhoods, whether it is a young single mom in Florida or a grandmother in Ohio, Hillary wants them to be defenseless, wants to take away any chance they have of survival,” Trump said.

“That’s why we’re going to call her Heartless Hillary. We can do without that,” Trump said, though he added, “I like Crooked Hillary better.”

He reiterated his desire to eliminate gun-free zones in schools and on military bases on his first day in office:

Trump used the example of the July 2015 shootings in Chattanooga, Tennessee, in which a gunman opened fire in gun-free zones on military installations there, killing five people

Trump’s talk to the NRA aimed to dispel fears among conservatives about his stance on gun control. In 2000, the presumptive Republican nominee expressed support for the ban and a longer waiting period for gun purchases, a position he has since reversed.

He has recently called gun bans “a total failure,” opposed an expansion of background checks, and called for concealed carry permits to be valid across all 50 states.

Before his speech, the NRA executive director Chris Cox announced the group’s endorsement of the candidate:

“We have to unite, and we have to unite right now. So on behalf of the thousands of patriots in this room and the 5 million NRA members across this country and the tens of millions who support us, I’m officially endorsing the NRA’s endorsement of Donald Trump for president.”

Hillary Clinton is set to speak about gun control at a Circle of Mothers event on Saturday May 21.