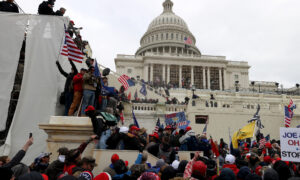 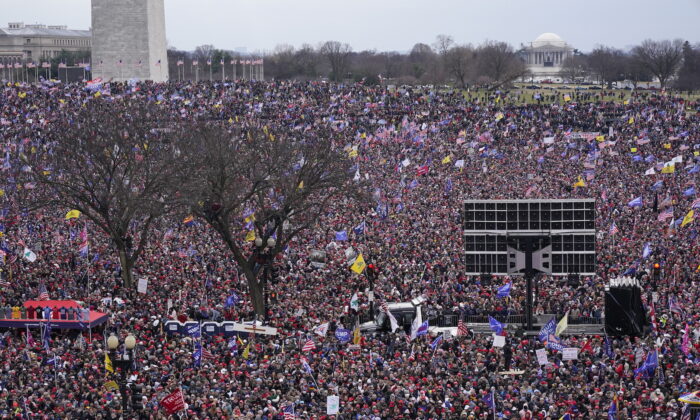 With the Washington Monument in the background, people attend a rally in support of President Donald Trump near the White House in Washington on Jan. 6, 2021. (Jacquelyn Martin/AP Photo)
2020 Election

WASHINGTON—Empty streets and a subdued atmosphere characterized Washington on Jan. 7 as Trump supporters processed the events of the previous day and the certification of the Electoral College votes by Congress overnight.

Many were packing up to go home, at the same time a fence was being erected around the Capitol; the National Guard presence was obvious.

Marine veteran Tony Good traveled from Florida and walked to the Ellipse to hear President Donald Trump speak in the morning. He said Trump didn’t incite violence in his speech.

“No, absolutely not. There’s a line between inciting to riot and standing on convictions,” Good told The Epoch Times. “He wasn’t telling anybody to riot, he was just telling them it’s our right to protest. That’s a right we have in America.”

Good became separated from his group and returned to his hotel to regroup after the speech. He didn’t go to the Capitol, but said he wishes he had.

“I call yesterday the first day in the 10-year war,” he said. “It’s going to be 10 years before this gets turned around. It’s going to take that long. War in the sense of … getting things to where they should be in America, as far as fair and free elections, election integrity.

Good said he isn’t surprised by what happened yesterday, but is feeling a little sad today “because there’s going to be a change going on.”

‘Stand Up for This Country’

Elizabeth Rowell flew alone from Fort Lauderdale, Florida, to join the protests. She found Trump’s speech to be “passionate,” but not to the point of incitement to riot.

“I never once felt unsafe. I met a lot of great patriots on the way. The entire time we were there, we chanted ‘U-S-A’ and sang the national anthem,” she said.

Today, however, Rowell said she’s feeling “kind of bummed, because I don’t like the way we were portrayed.”

“I feel like the media makes it look like the … people that went inside have now made the rest of us outside look like we’re a bunch of hoodlums. But we didn’t do anything. We were all there just to be patriotic and support our president,” she said.

“I came here to stand up for this country. I think it was ripped off, stolen from us. I’m not going to accept Biden as president, and I do feel like the world’s getting ready to go to crap because of him.”

She said she continues to stand with Trump.

Martha Todd, a retiree from Lynchburg, Virginia, said she felt good about the Jan. 6 protest rally, but didn’t hear about the fatal shooting of Ashli Babbitt or the storming of the building until after she left.

“I feel bad about the way things worked out, and I really feel bad the way the media is portraying everything.  Of course they’re making it all sound terrible … we’re mobsters and mobs and violent. That’s not true,” she said.

“I’m very disillusioned. But I do not support Biden. His family is a crime family. I just feel like we’re screwed. I don’t feel like I’ve lost hope—there’s always hope. There’s so many people out there that are so against Trump. They lie and cheat and steal—how are you going to fight against that—when they cheat? And they all support each other.”

Self-described conservative Carol Logreco traveled from New Orleans and was at both the Ellipse and the Capitol. She said she wanted to be there to support freedom and the ability to have free and fair elections.

“[We] feel like we’re losing a lot of our rights, and that we’re on the verge of becoming more of a socialist or Marxist society,” she said. “You can see the indoctrination of our children and students and in our communities, and I really felt like this was the last real stance to speak up before we don’t have a chance to do that anymore.”

She said yesterday felt festive in general, but she saw some agitators within the crowd, which she believes infiltrated the protest.

“I feel disappointed. Disheartened. I feel like it’s a war. And I think this was a battle within the war. And I don’t mean that like a physical battle in war but more of a philosophy, and where do we stand as Americans, and where are our rights and our freedoms,” Logreco said.

“People can go to Portland and Seattle and burn buildings down and take over police stations and everything else, and it’s called Summer of Love.”

Going forward, she said, “we have to regroup and figure out what’s the best way to still be heard.”

‘This Is a Bad Situation’

“Because of what my parents lived, I understand the gravity of this—this is a bad situation,” he said.

Morejon said his parents lived in Cuba as Fidel Castro took power and lived a difficult life until their escape in the early 1970s.

“They made [my mother] work in agriculture and work her way out of Cuba for four years. She had to go cut sugar cane and pick fruit and vegetables for 14 hours a day as a 17-year-old woman … away from her family. They would put maggots in their food and rats in their water supply,” he said.

Morejon said he fears a similar future is possible in the United States under the control of the globalist elites and the Chinese communist regime. He said Trump has stood up to the Chinese regime, after it got a pass for decades under previous U.S. presidents.

“It’s the globalists, it’s the elitists, and it’s China. They want to tax us, they’re going to raise our taxes, they want to vaccinate us, they want to keep us under government control. And that’s where I see it going,” Morejon said.

Kim Kramer flew in from New Orleans to join what she said was a “very upbeat, very enlightening” day with “people who want to support one another, support our country, support our president.”

Today, she said she has mixed feelings.

“I knew this was a demonstration of the people to show our representatives how we do support our president. Other than that, I wasn’t expecting or anticipating anything else,” she said.

“The fight’s still not over. But I don’t get over excited about it. And I don’t get depressed about any of it, because I think it’s all in the right hands, it’s in good hands—whether it’s exposing those who are correct and those who aren’t.

“I have strong faith in God, and I do believe that with all our prayers, and with God looking out … I believe there’s just some really good people that do have faith.”