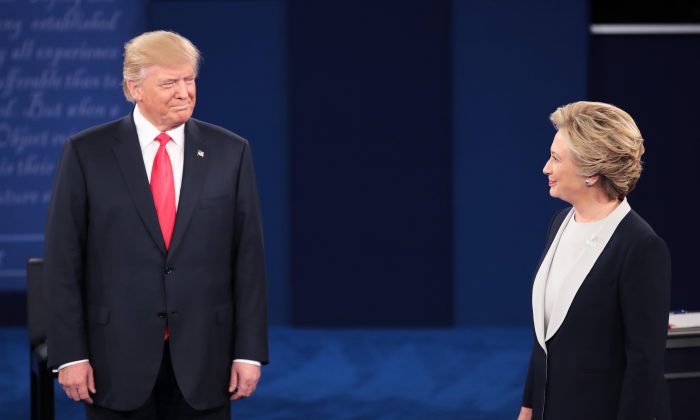 Former President Donald Trump on March 24 sued former Democrat presidential candidate Hillary Clinton and the man who compiled the infamous Steele dossier on him while being paid by her campaign.

The lawsuit, filed in federal court in Florida, says Clinton and ex-British spy Christopher Steele, along with around 30 others, carried out a plot to “weave a false narrative” that Trump was colluding with Russian actors.

“The actions taken in furtherance of their scheme—falsifying evidence, deceiving law enforcement, and exploiting access to highly-sensitive data sources—are so outrageous, subversive and incendiary that even the events of Watergate pale in comparison,” the 108-page suit states.

“Under the guise of ‘opposition research,’ ‘data analytics,’ and other political stratagems, the defendants nefariously sought to sway the public’s trust,” it added. “They worked together with a single, self-serving purpose: to vilify Donald J. Trump. Indeed, their far-reaching conspiracy was designed to cripple Trump’s bid for presidency by fabricating a scandal that would be used to trigger an unfounded federal investigation and ignite a media frenzy.”

Steele compiled a dossier based on what he claimed were sources inside Russia. His main source was revealed in 2020 to be Igor Danchenko, who has been investigated by federal agents for possibly being a Russian spy.

Steele was paid by the Democratic National Committee (DNC) and Clinton’s campaign for his work, which was released to select reporters ahead of the 2016 election.

Trump ended up winning the election over Clinton but was dogged by the collusion allegations for years after becoming president. Special counsel Robert Mueller ultimately found no evidence of conspiracy or coordination between Trump or his campaign and Russians.

Many claims contained in the dossier were later confirmed as false while others have never been proven.

Clinton, Steele, and the DNC were named as defendants in the suit.

Others include Fusion GPS and its operatives, who helped produce and distribute the dossier; Danchenko and Clinton lawyer Michael Sussmann, both charged with lying to the FBI as part of special counsel John Durham’s investigation; former FBI officials James Comey and Andrew McCabe; and former FBI agents Lisa Page and Peter Strzok.

Kevin Clinesmith, the former FBI lawyer who doctored an email to say a former Trump campaign associate was not a CIA asset when the original missive said he was, is also a defendant.

The defendants either did not immediately respond to requests for comment or couldn’t be reached.

The complaint alleges crimes including conspiracy, theft of trade secrets, and obstruction of justice.

The complaint seeks damages amounting to at least $24 million and a jury trial.

The case was assigned to U.S. District Judge Donald Middlebrooks, a Clinton nominee, although U.S. Magistrate Judge Shaniek Maynard, may handle some or all of the proceedings, according to the court docket.