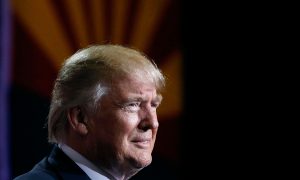 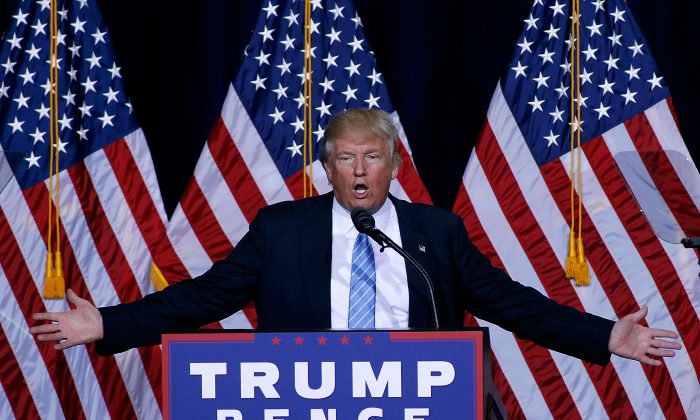 In the speech, the Republican presidential candidate returned to a hard line position, backing away from a softer, more compassionate approach that he had signaled in recent weeks.

“Anyone who has entered the United States illegally is subject to deportation,” Trump said, reiterating a position he’s expressed before, but recently backed away from. “That is what it means to have laws and to have a country. Otherwise we don’t have a country.”

“We’re going to triple the number of ICE deportation officers,” Trump said, adding that he would organize a special task force to assist in the deportation process focused on “identifying and quickly removing the most dangerous criminal illegal immigrants.”

“The truth is, the central issue is not the needs of the 11 million illegal immigrants or however many there may be—and honestly we’ve been hearing that number for years,” Trump said before questioning the number of illegal immigrants in the United States.

It’s not the number of immigrants for Trump, but rather the effects of illegal immigration to American workers and jobs.

“Anyone who tells you that the core issue is the needs of those living here illegally has simply spent too much time in Washington,” he said. “There is only one core issue in the immigration debate, and that issue is the well-being of the American people.”

Central to Trump’s campaign has been the theme of keeping “America First,” and keeping in line with that theme he stressed that America should choose people from countries that can successfully assimilate to American values.

“We also have to be honest about the fact that not everyone who seeks to join our country will be able to successfully assimilate,” he said. “Sometimes it’s just not going to work out. It’s our right, as a sovereign nation to choose immigrants that we think are the likeliest to thrive and flourish and love us.”

In order to choose the immigrants with those values, he has proposed a method of “extreme vetting,” which includes an “ideological certification to make sure that those we are admitting to our country share our values and love our people.”

Trump also doubled down on a number of proposals that he’s made over the last year.

“We will build a great wall along the southern border,” he said. “And Mexico will pay for the wall. One hundred percent. They don’t know it yet, but they’re going to pay for it.”

When asked at a press conference with President Peña Nieto in Mexico City, Trump said that they did not discuss who would pay for the wall.

“We did discuss the wall. We didn’t discuss payment of the wall. That’ll be for a later date,” Trump said in Mexico City.

“At the start of the conversation with Donald Trump, I made it clear that Mexico will not pay for the wall,” Peña Nieto tweeted, after their meeting Wednesday.

Towards the end of the speech, Trump brought out a group of “Angel Moms” who each spoke briefly about their sons or daughters being killed by illegal immigrants.

“So, now is the time for these voices to be heard,” Trump said after the group left.

“Now is the time for the media to begin asking questions on their behalf. Now is the time for all of us as one country, Democrat, Republican, liberal, conservative to band together to deliver justice, and safety, and security for all Americans.”