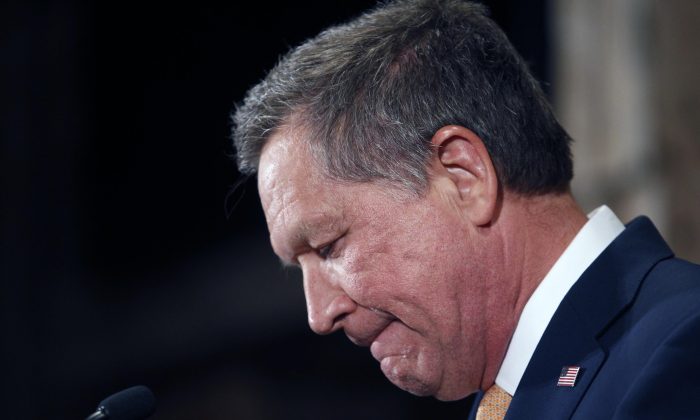 Republican presidential candidate Ohio Gov. John Kasich announces he is suspending his campaign May 4, 2016 in Columbus, Ohio. Kasich is the second Republican candidate within a day to drop out of the GOP race. (J.D. Pooley/Getty Images)
2016 race

Donald Trump’s campaign—which has had difficulty uniting the Republican Party—panned Governor John Kasich’s decision to stay away from the Republican National Convention this year, even though it’s being held in his home state of Ohio.

Manafort then got booed by the crowd at Flannery’s Irish Pub in Cleveland, Ohio, where MSNBC’s “Morning Joe” was being recorded live ahead of the Republican National Convention on Monday, highlighting how popular the governor is in his home state.

Last October, Kasich polled with a 62 percent approval rating among Ohioans, and on March 15, he won the Ohio primary by a sizable margin—his only win during the primaries.

After ending his campaign Kasich has been reluctant to throw his full support behind the presumptive nominee, saying he “just couldn’t do it” when asked by Scarborough on “Morning Joe” in June if he was endorsing Trump after having pledged to back the nominee.

“You know, it’s painful. It’s painful. You know, people even get divorces—you know? I mean, sometimes, things come out that… Look, I’m sorry that this has happened,” he said. “I just can’t do it.”

Rubio—while he has endorsed Trump—will not be attending the convention due to his recently announced reelection campaign for the Florida Senate. Like Kasich, Senator Ted Cruz (R-Tx.) has not endorsed Trump, but the former rival of the real estate mogul accepted a speaking spot in the convention on Wednesday.

What Will Chris Christie and Newt Gingrich Do Now?

Throughout the convention, Kasich will be at other events in the city including a meeting with Mexico’s ambassador to the United States on Monday, and a speech to the U.S. Hispanic Chamber of Commerce on Tuesday.

This isn’t the only instance of a Trump surrogate condemning the Republicans who are abstaining from showing up to the convention. Newt Gingrich also commented on the absence of the Bush family from the festivities in Cleveland.

“The reason people nominated Donald Trump is they weren’t happy, and frankly the Bushes are behaving, I think, childishly,” Gingrich said in an interview from the convention floor with ABC’s George Stephanopoulos.

“Childishly. I mean, Jeb lost,” Gingrich said. “You know, Get over it. I mean, the fact is, this Republican Party has been awfully good to the Bushes.”

Beyond The Donald: 4 Things to Watch at the Republican Convention

The Bush Family—including George W., George H.W., Barbara, and Jeb Bush have all announced that they are abstaining from attending the Cleveland convention and will not be making endorsements.