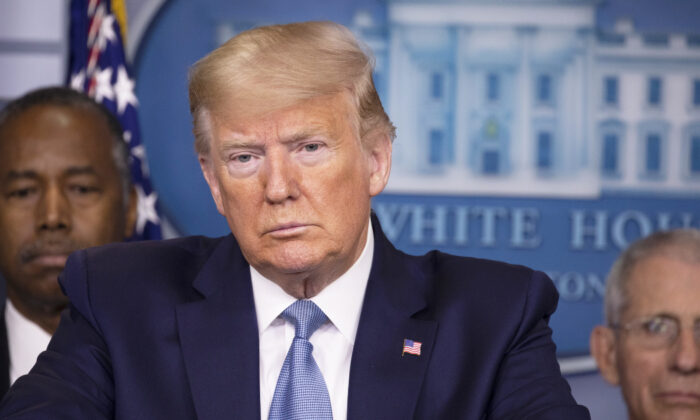 Trump: Spread of CCP Virus Not the Fault of Asian Americans

President Donald Trump said on March 23 that Asian Americans aren’t responsible for spreading the CCP virus and that they need protection, after he was accused of racism in labeling the growing pandemic the “Chinese virus” last week.

“It’s very important that we totally protect our Asian American community in the United States, and all around the world,” Trump said during a White House press briefing March 23 with his virus task force.

“They are amazing people and the spreading of the virus is not their fault in any way, shape, or form,” he said. “They’re working closely with us to get rid of it, and we will prevail together.”

Trump emphasized his comments in a Twitter thread on March 23.

It is very important that we totally protect our Asian American community in the United States, and all around the world. They are amazing people, and the spreading of the Virus….

When asked at the news conference what prompted his remarks, Trump said that it seems that “there could be a little bit of nasty language toward the Asian Americans in our country.”

“I don’t like that at all,” he said. “So I just wanted to make that point, because they’re blaming China, and they are making statements to great American citizens that happen to be of Asian heritage, and I’m not gonna let that happen.”

It came after the president called the CCP virus the “Chinese virus” in a Twitter post last week.

The United States will be powerfully supporting those industries, like Airlines and others, that are particularly affected by the Chinese Virus. We will be stronger than ever before!

“The United States will be powerfully supporting those industries, like Airlines and others, that are particularly affected by the Chinese Virus. We will be stronger than ever before!” Trump posted on March 17.

Trump explained the following day at a press conference that his choice of words was based on Beijing “putting out information that was false, [saying] that our military gave this [virus] to them.

“Rather than having an argument, I had to call it where it came from. It’s a very accurate term,” he said.

The Epoch Times refers to the novel coronavirus, which causes the disease COVID-19, as the CCP virus because the Chinese Communist Party’s coverup and mismanagement of the outbreak in Wuhan allowed the virus to spread across China and create a global pandemic.

Trump has repeatedly criticized China and its handling of the virus outbreak, but he’s been careful to avoid criticisms of its leader, Xi Jinping.

On March 20, Trump said he greatly respects China and Xi, but added that it was unfortunate the virus began in China and got out of control. U.S. Secretary of State Mike Pompeo said Beijing’s delay in sharing information about the virus created risks for people worldwide.

At the same time, Trump and his administration have strongly rejected attempts by some Chinese officials to blame the virus on the U.S. military.

Trump last week suggested that the Chinese communist regime is to blame for the CCP virus, which has spread to more than 160 countries and territories around the world, killing thousands.