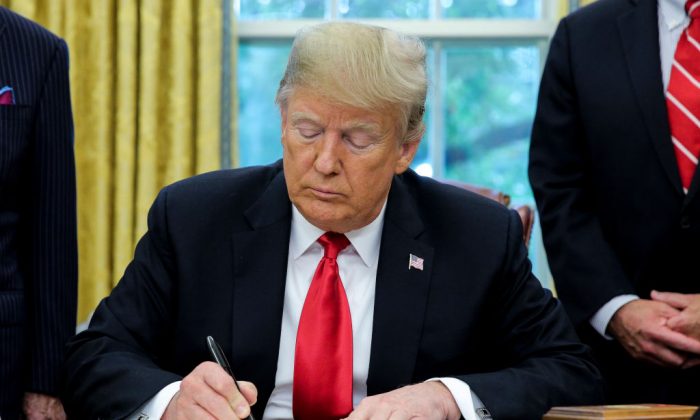 President Donald Trump signs S. 3508, the Save Our Seas Act of 2018, during a ceremony in the Oval Office of the White House on Oct. 11, 2018. (Oliver Contreras -Pool/Getty Images)
Politics

President Donald Trump extended and expanded what he called a “very important” program to clean up sea-borne waste by signing a bill to boost international cooperation on removing debris from the planet’s oceans.

The Save Our Seas Act of 2018 extended the National Oceanic and Atmospheric Administration’s (NOAA) Marine Debris Program for an additional five years, and directed the State Department and other federal agencies to work internationally to prevent countries from using the ocean as a landfill.

The act charges NOAA to collaborate with other U.S. government agencies to deal with land- and ocean-based sources of the trash, both domestic and foreign.

“People don’t realize it, but all the time we’re being inundated by debris from other countries,” Trump said. “And we will be responding and very strongly.”

In attendance at the Oct. 11 signing ceremony were Sens. Dan Sullivan (R-Alaska) and Sheldon Whitehouse (D-R.I.), the sponsor and co-sponsor of the bill, respectively, whose presence attested to the bipartisan nature of the bill. The House held a voice vote on it, which wasn’t recorded; the Senate passed it unanimously, Sullivan said.

Through its diplomatic channels, the United States has already been putting other countries on notice that the Trump administration will no longer tolerate trash being dumped in the ocean, Trump said.

“And I can tell you that Dan [Sullivan] and Sheldon [Whitehouse] were very insistent on trying to get that into the USMCA, the new agreement that we have with Canada and Mexico. And we’ll be putting it into other agreements also,” Trump said.

Whitehouse concurred and said they were in the process of working it into an agreement with the Philippines, which he named as “one of the worst three” ocean polluters.

For Trump, the issue is an economic one as well as an environmental one. The United States has to clean up the trash that floats into U.S. waters and onto U.S. beaches each year, which not only creates a burden on the government, but hurts businesses along the coast. In one national ocean cleanup, the Ocean Conservancy reported picking up 4,144,109 pounds of trash from over 8,500 miles of coastline.

“This waste, trash, and debris harms not only marine life, but also fishermen, coastal economies along America’s vast stretches,” Trump said. “As president, I will continue to do everything I can to stop other nations from making our oceans into their landfills.”

The act also requires a representative from the State Department, as well as from the Department of the Interior, to join the Interagency Marine Debris Coordinating Committee.

The nonprofit Ocean Conservancy called the legislation a “triumph of bipartisanship,” and praised it for addressing the “the ever-increasing global marine-debris problem.”

Even the American Chemistry Council, an association of chemical manufacturers and other chemistry-related businesses, applauded the passage of the legislation. “This important bipartisan legislation reinvigorates existing programs and includes language recognizing the need to address the lack of waste management systems in developing countries,” it said on its blog.