Trump Responds to Question on If He Will Rejoin Twitter 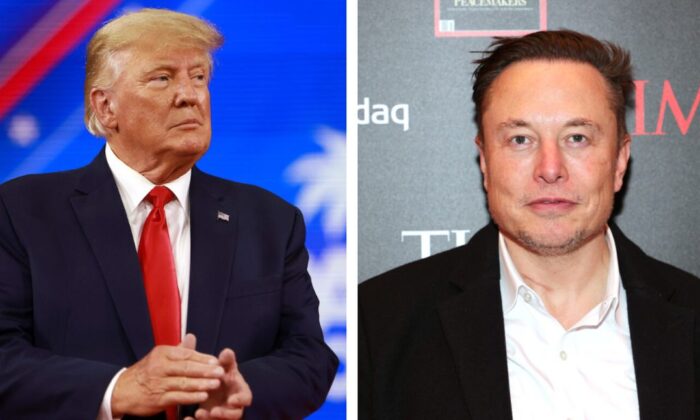 Hours before Twitter owner Elon Musk reinstated former President Donald Trump’s account nearly two years after it was suspended, Trump suggested Saturday that he has no interest in rejoining—even as his account had more than 80 million followers as of Sunday morning.

“I don’t see any reason for it,” the former president said via video when asked whether he planned to return to Twitter on Saturday, according to the Reuters news agency. Previously, Trump stated that he would not return to Twitter and praised his Truth Social.

Trump told a crowd Saturday that he would stick with his new platform Truth Social, the app developed by his Trump Media & Technology Group (TMTG) startup, which he claimed had better user engagement than Twitter and was doing “phenomenally well.” The Epoch Times has contacted Trump’s team for comment.

The @realDonaldTrump says he doesn’t see any reason for returning to @Twitter just hours before @elonmusk restores the former President’s account. Trump was instead touting his own media platform Truth Social during @RJC Annual Meeting in Las Vegas https://t.co/cX3I56megy pic.twitter.com/Ttm7rXYfu5

For the past 22 months, upon trying to access the 45th president’s page, it would return a message saying the account was suspended. Starting Saturday evening, users began re-tweeting some of Trump’s posts, including ones from about a decade ago criticizing Cher, Rosie O’Donnell, and “the Coca-Cola company.”

Trump’s last Twitter posts revolved around him asking Jan. 6 protesters to remain peaceful, his final one—dated Jan. 8, 2021—was a statement that he would not attend Joe Biden’s presidential inauguration. Others pertained to claims of voter fraud during the 2020 election.

“I am asking for everyone at the U.S. Capitol to remain peaceful. No violence!” he wrote on Jan. 6. “Remember, WE are the Party of Law & Order—respect the Law and our great men and women in Blue. Thank you!”

And Trump also wrote “please support our Capitol Police and Law Enforcement. They are truly on the side of our Country. Stay peaceful!” He also posted a video on Jan. 7 condemning the protesters who entered the Capitol on Jan. 6: “For those who broke the law, you will pay.”

However, Musk last week wrote that Twitter has seen an “all-time high” in traffic amid sweeping changes he enacted following his $44 billion takeover of the social media platform.

About 15 million Twitter users voted on a Musk poll to reinstate Trump. About 51.8 percent voted in favor of reinstating the former president, who used Twitter to devastating effect and often shaped news cycles for days—or weeks—at a time.

The 75,000,000 great American Patriots who voted for me, AMERICA FIRST, and MAKE AMERICA GREAT AGAIN, will have a GIANT VOICE long into the future. They will not be disrespected or treated unfairly in any way, shape or form!!!

“The people have spoken. Trump will be reinstated,” Musk wrote on Saturday evening, moments before Trump’s account appeared online.

Trump’s Twitter account, which was banned on Jan. 8, 2021, began accumulating followers and had nearly 100,000 followers by 10 p.m ET Saturday. Some users initially reported being unable to follow the reinstated account on Saturday evening. By Sunday morning, the account had amassed about 83 million followers.

Meanwhile, Truth Social has been Trump’s main source of direct communication with his followers since he began posting on the app regularly in May. He has used Truth Social to promote his allies, criticize opponents, and defend himself.

If Trump returned to Twitter, the move would raise questions about his commitment to Truth Social, which launched on Apple’s App Store in February and Google’s Play Store in October. Trump has some 4.57 million followers on the platform.

But the former president may opt to come back to Twitter to promote his newly announced presidential campaign. Last Tuesday, Trump said he would be running for a third time.

Twitter was the first platform to suspend Trump following the Jan. 6 Capitol incident. Twitter, Facebook, Google, and others alleged that Trump was inciting violence, although the former president said during a Jan. 6 rally that his supporters should “peacefully and patriotically make your voices heard.”