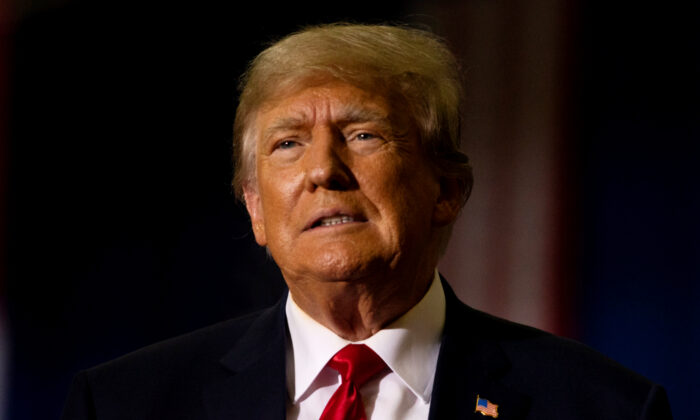 Former President Donald Trump gets ready to speak during a Save America rally in Warren, Mich., on Oct. 1, 2022. (Emily Elconin/Getty Images)
By Zachary Stieber

Former President Donald Trump has asked the U.S. Supreme Court to intervene in the legal case surrounding the documents seized by the FBI from his estate in Florida.

An appeals court acted improperly when it blocked part of an order inserting a special master, or independent third party, into the case, Trump said through his lawyers in an appeal to Justice Clarence Thomas, a George H.W. Bush appointee.

U.S. District Judge Aileen Cannon agreed to appoint a special master on Sept. 5. At the same time, the Trump appointee prohibited the government from using records with classified markings that were seized from Mar-a-Lago as part of the criminal investigation into Trump.

But the actual order appointing U.S. District Judge Raymond Dearie as special master didn’t come until Sept. 15. The Department of Justice appealed the first order, but not the second, Trump lawyers noted. And special master orders are not appealable under federal law, they said.

“That appointment order is simply not appealable on an interlocutory basis and was never before the Eleventh Circuit. Nonetheless, the Eleventh Circuit granted a stay of the Special Master Order, effectively compromising the integrity of the well-established policy against piecemeal appellate review and ignoring the District Court’s broad discretion without justification,” Trump’s application to the nation’s top court stated.

“This unwarranted stay should be vacated as it impairs substantially the ongoing, time-sensitive work of the Special Master. Moreover, any limit on the comprehensive and transparent review of materials seized in the extraordinary raid of a President’s home erodes public confidence in our system of justice,” his lawyers added.

In a footnote in its Sept. 21 ruling, the U.S. Court of Appeals for the 11th Circuit addressed Trump’s claim, asserting Cannon’s orders were “inextricably intertwined.”

The appeals court panel wrote that “the district court ‘enjoin[ed] the Government from reviewing and using the seized materials for investigative purposes pending completion of the special master’s review or further Court order,’ ‘in natural conjunction with [the appointment of the special master].'”

That ruling led to the special master and Trump being blocked from viewing all records with classified markings that were seized from the former president’s estate. About 100 documents fit that definition, according to an inventory released by the FBI.

A request for a partial stay of Cannon’s order had been denied by Cannon herself, prompting the government to seek relief from the appeals court.

The application is not aimed at the other portion of the appeals court ruling, which enabled the government to resume using the records with classified markings in its criminal investigation of Trump. That’s because the first Cannon order “is appealable as a matter of right,” Trump’s lawyers said.