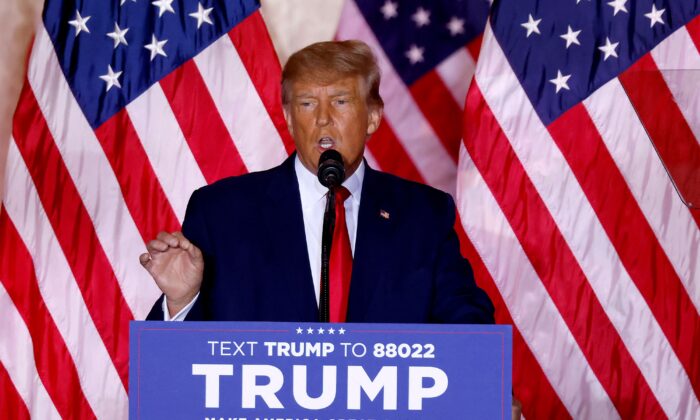 Former President Donald Trump on Dec. 19 dismissed the Jan. 6 committee’s criminal referrals, saying that the panel has leveled “fake charges” against him and they only make him “stronger.”

“These folks don’t get it that when they come after me, people who love freedom rally around me. It strengthens me. What doesn’t kill me makes me stronger,” Trump wrote in a statement posted on his Truth Social platform.

He added, “Americans know that I pushed for 20,000 troops to prevent violence on Jan 6, and that I went on television and told everyone to go home.”

Trump, who announced his third bid for the presidency in November, said members of the committee wanted to stop his presidential campaign.

“The people understand that the Democratic Bureau of Investigation, the DBI, are out to keep me from running for president because they know I’ll win and that this whole business of prosecuting me is just like impeachment was—a partisan attempt to sideline me and the Republican Party,” Trump added.

The House Select Committee on the Jan. 6 Capitol breach voted unanimously during a hearing on Monday to refer Trump to the Department of Justice on four criminal charges: insurrection, obstruction of an official proceeding, making a false statement to the federal government, and conspiracy to defraud the federal government.

“Our criminal referrals were based on the gravity of the offense, the centrality of the actors, and the evidence we had available to us,” Rep. Jamie Raskin (D-Md.), one of the seven Democrats on the committee, told reporters after the hearing.

Trump also compared the criminal referrals by the committee to his second impeachment trial, which acquitted Trump of an insurrection incitement charge in February last year.

“The Fake charges made by the highly partisan Unselect Committee of January 6th have already been submitted, prosecuted, and tried in the form of Impeachment Hoax # 2. I WON convincingly. Double Jeopardy anyone!” Trump wrote in a separate Truth Social post on Monday.

The referrals by the committee are not binding on the Department of Justice. However, if the federal department follows through with the committee’s recommendation, Trump could face up to 25 years in prison and fines.

The committee’s referrals have drawn criticism and praise in Congress, with reactions splitting mostly along party lines.

“No man, not even a President, is above the law. The anger and resentment Donald Trump stoked with his ‘Big Lie’ created a deadly event on January 6, and left a perpetual stain on our nation’s history,” Durbin wrote.

Democrats have accused Trump of spreading lies about the 2020 presidential election. In June, Trump issued a statement outlining his arguments disputing the election results. Vote-counting stoppage on election night and ballot trafficking scheme were among those present as evidence.

There have been other pieces of evidence suggesting that fraud took place in 2020. For example, the public interest organization True the Vote found in March that at least 137,500 absentee ballots were cast through unlawful vote trafficking in several cities in Wisconsin.

House Defense Appropriations Subcommittee Chair Betty McCollum (D-Minn.) said in a statement applauding the committee members, that their service “is commendable and should be honored.”

“I strongly support the select committee’s referral and the esteemed place in history their work will hold for generations to come,” McCollum wrote.

Some GOP lawmakers criticized the committee following its hearing.

“Here is the real reason the J6 communist committee is making criminal referrals to the DOJ on Trump,” Rep. Marjorie Taylor Greene (R-Ga.) wrote on Twitter. “They can’t beat President Trump  and they know it.”

“January is coming,” she added.

The poll (pdf), conducted between Dec. 9 and 14, also showed that 59 percent of respondents said Trump would be “better positioned” to beat President Joe Biden in the 2024 election than someone else.

“Today’s referrals by the January 6 Unselect Committee comes as no surprise,” Mooney wrote. “The panel of departing partisan hacks continued their relentless assault on President Donald Trump after House Democrats already voted to impeach him twice.”

Mooney added, “The continued demonization of President Trump is an attempt to cover up for the disastrous open border, reckless spending, and projecting American weakness abroad policies of President Joe Biden.”

“House Democrats and Vicious Never Trumpers, who were run out of Congress by the American people, continue to desperately and unconstitutionally target President Trump and Republicans,” Stefanik wrote.

“The Republican Majority will hold House Democrats accountable for their illegitimate abuse of power.”