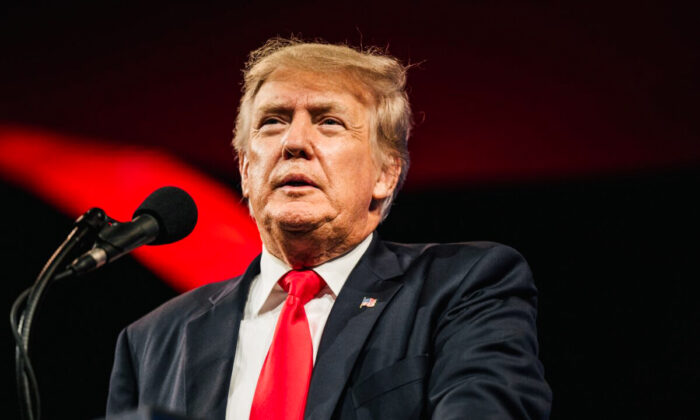 Former President Donald Trump has secured agreements from investors for $1 billion as he works to establish a social media platform to rival the Big Tech companies that deplatformed him.

Trump announced on Dec. 4 that the pledges from unnamed investors will turn into investments once Digital World Acquisition Corp., a blank-check firm, and the social media group known as Trump Media & Technology Group Corp. are combined. The group plans to debut a platform called TRUTH Social in 2022.

“$1 billion sends an important message to Big Tech that censorship and political discrimination must end,” Trump, the chairman of the group, said in a statement.

“Our focus on delivering public shareholder value drives our decision-making and by accepting these commitments for a strategic infusion of growth capital, we believe the combined company can grow on an incredibly strong foundation,” said Patrick Orlando, chairman of Digital World.

The investors were described as “a diverse group,” but no names were released. The capital is expected to be used to hire top talent, for advertising campaigns, and to help develop the business.

Trump has refrained from using social media since he was booted from Twitter, Facebook, and other large platforms before he left office in January.

Executives at the big tech companies accused Trump of violating their terms of service with some of his posts and suspended or banned him following the Jan. 6 breach of the U.S. Capitol. They accused him of encouraging violence with statements issued after the breach, but Trump disagreed, as his last Facebook post was calling for peace.

Trump Media & Technology Group Corp. is aimed at becoming “a media powerhouse to rival the liberal media consortium and fight back against the ‘Big Tech’ companies of Silicon Valley,” according to a company presentation.

“If Big Tech can censor the president of the United States, they can censor anyone,” the presentation stated.

The group also plans to launch a digital streaming service, a news service, and other services.

Trump’s announcement in October of the forthcoming technology alternatives drove a high volume of trading. Trading in Digital World stocks has been halted several times as the price has skyrocketed.

Some people said they made thousands of dollars from the stock.

Digital World stated in a filing that it had grossed more than $293 million from the sales of approximately 4.8 million shares.

Blank-check companies are those without a specific business plan or purpose or those that indicate that their business plans are to merge with or acquire another company or companies, according to the U.S. Securities and Exchange Commission.